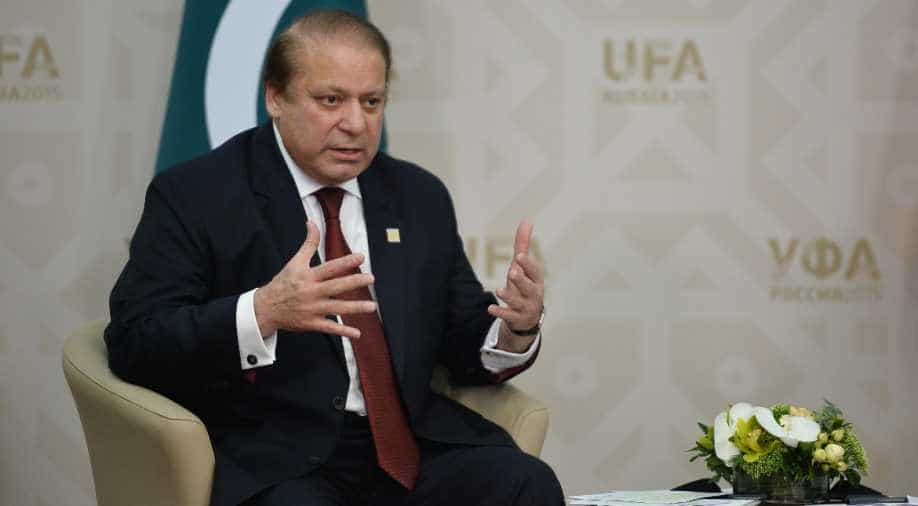 'The dream of peace and prosperity of the people of this region will remain elusive without resolving this dispute in accordance with the UN Security Council resolutions,' Pakistan PM Nawaz Sharif said regarding the Kashmir conflict. Photograph:( AFP )

Pakistan Prime Minister Nawaz Sharif on the occasion of 'Kashmir Solidarity Day' said Kashmir is the "core dispute" between India and Pakistan and peace will be difficult in the region without resolving the issue.

"Jammu & Kashmir is the core dispute between Pakistan and India. The dream of peace and prosperity of the people of this region will remain elusive without resolving this dispute in accordance with the UN Security Council resolutions," Sharif said on Sunday.

He referred to the Kashmir conflict as the "unfinished agenda of partition" and said, "for the last seven decades India has denied the people of Kashmir the right to self-determination promised to them by the international community through numerous UN Security Council resolutions".

India's home minister Rajnath Singh retaliated by saying a referendum must be conducted in Pakistan to determine whether their citizens wanted to remain there or to merge with India.

He also said that Kashmir was always with India and will always remain a part of it.

There should instead be a referendum in Pakistan, asking whether its people want to remain in the same country or want to merge with India," ANI quoted Rajnath Singh as saying at an election rally in the northern state of Uttar Pradesh.

The Press Trust of India had earlier quoted Sharif as saying, "the people of Pakistan join their Kashmiri brothers and sisters in observing Kashmir Solidarity Day today to reaffirm our moral, diplomatic and political support to the legitimate struggle of the Kashmiri people for their basic human rights, especially the right to self-determination enshrined in the relevant UN Security Council resolutions."

He said, "Pakistan strongly condemns the systemic state terrorism and brutal killings of the innocent people of Kashmir by Indian forces, However, all the Indian brutalities have failed to deter the people of Kashmir from their cause for freedom from Indian subjugation."

He called on the international community to raise their voice against the "gross violations of human rights and the reign of terror unleashed by Indian forces" in Kashmir.

"We urge India to stop bloodbath in Kashmir and allow the holding of free and fair plebiscite under the UN auspices," he added.

The Kashmir conflict dates back to 1947 when India and Pakistan gained independence from Britain. The two countries have fought two wars over Kashmir in 1965 and 1971, along with the Kargil conflict in 1999 which threatened to escalate into an all-out war between the two countries but ended after India pushed back Pakistani infiltrators in a high altitude battle involving the Indian Army and Air Force.