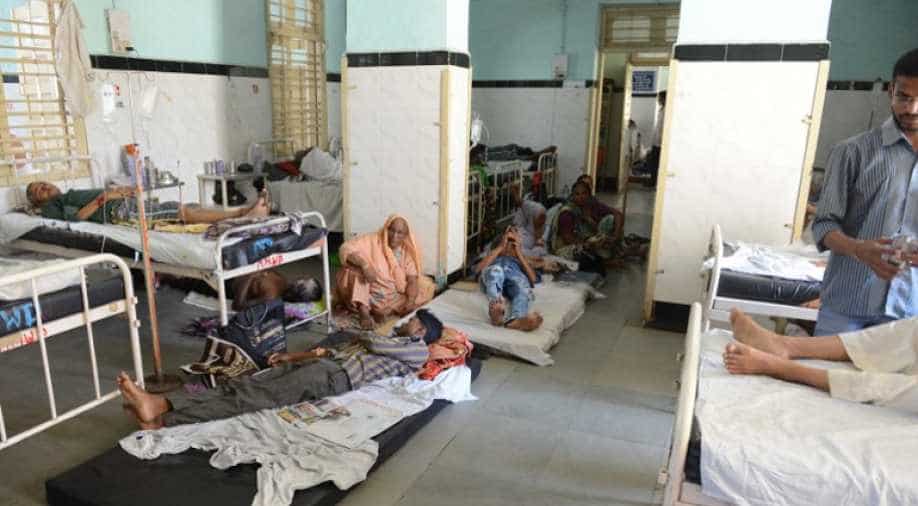 The government?s performance with respect to the Millennium Development Goals has been mixed. Photograph:(AFP)
Follow Us

Eradication of yaws and neonatal tetanus, 85 per cent implementation of pictorial warnings on tobacco product packs, and setting up of a task force for Sustainable Development Goals (SDGs) 3 have been India’s biggest achievements in terms of healthcare in 2016.

The government’s performance with respect to the Millennium Development Goals (MDG) has been mixed, with some successes and several misses. The nine targets of SDG 3 give an impetus to India’s health priorities and provide an opportunity to step up the efforts. In the light of India's MDG performance and observations therein, a target-wise analysis of the existing and the soon-to-be-launched government initiatives is likely to give a clearer picture of what can be expected.

India’s initiatives to increase the number of births attended by skilled health personnel, like Janani Suraksha Yojana and Janani Shishu Suraksha Karyakram, have been successful in bringing down the MMR and IMR. Since the urban-rural gap is significant across the country, approximately 8.9 lakh Accredited Social Health Activists (ASHAs) in rural areas spread awareness and assist in accessing healthcare. The government has been steadily advancing the maternal health care facilities under Reproductive and Child Health (RCH II) and National Rural Health Mission (NRHM).

Apart from specialised schemes and initiatives such as these, India’s drive to end hunger and ensure minimum nutrition is likely to help bringing down maternal mortality. Malnutrition is another major cause of maternal mortality that has been getting addressed through a convergence of a number of general and specific food and nutrition schemes.

Target 2: By 2030, end preventable deaths of newborns and children under five years of age

Apart from making constant efforts at enabling people to access antenatal and postnatal healthcare, specialised schemes like Integrated Child Development Services Scheme focus on nutritional needs. As per the 2013 data, the ICDS Scheme is covering 1026.03 lakh beneficiaries under supplementary nutrition making it one of the world’s largest programmes for early childhood care and development.

National Health Mission with its programme on child health aims at integrating schemes and interventions vital for bringing down the under-five mortality. Facility Based Newborn Care (FBNC) is one such intervention to meet that end. Till Dec 2014, there were 14,135 Newborn Care Corners, 550 Special Newborn Care Units (SNCUs) and 1,810 Newborn Stabilization Units (NBSUs) operational to provide care for sick newborns across the country. Additionally, promoting Infant and Young Child Feeding in partnership with hospitals is improving nutrition status of the infants.

Target 3: By 2030, end the epidemics of AIDS, tuberculosis, malaria and neglected tropical diseases and combat hepatitis, water-borne diseases and other communicable diseases

One of the biggest health sector achievements of India has been the complete eradication of Polio. India’s effective management of the "Pulse Polio" drive under the guidance of UNICEF has resulted in WHO officially declaring India polio-free in March 2014. National AIDS Control (NACO) Programme has been playing a significant role in bringing down the annual new infection numbers. Collaborations such as one with UNICEF for spreading awareness and another with Hindustan Latex Limited for condom vending machines project have resulted in changing attitudes towards sexual health. While high prevalence states like Andhra Pradesh, Maharashtra, Karnataka and Tamil Nadu have witnessed a significant drop in new infections, the contribution of low prevalence states has been high at 57 per cent in 2011. This warrants a shift of focus to the low prevalence areas. Free First line and second line Anti-Retroviral Treatment (ART) through ART centres and Link ART Centres, Centres of Excellence and ART plus centres have been successful in reducing the number of AIDS-related deaths. Exalting these initiatives will improve statistics further.

National Vector Borne Disease Control Programme (NVBDCP) is an umbrella programme for prevention and control of Vector Borne Diseases operating largely in rural, tribal and urban slum area. Together with schemes like Urban Malaria Scheme, vector control is done through various clinical and legislative methods. National Policy on Malaria (2013) has noted the availability of more effective antimalarial drugs and the drug resistance status for effective treatment of the disease.

In two decades, from 1990 to 2011, Tuberculosis prevalence has seen more than a 50 per cent reduction. India’s research in TB has benefitted patients across the world and yet the disease has not been eradicated. Since 2006, the country has been under universal coverage of DOTS, a systematic strategy to combat TB. The Revised National TB Control Programme is further widening the scope to reach out to all TB patients with special provisions for marginalised sections of the society.

Target 4: By 2030, reduce by one-third, premature mortality from non-communicable diseases through prevention and treatment and promote mental health and well-being

India saw the growth of life expectancy by eight years between 1990 and 2013. Non-communicable diseases take the largest toll on the health of population. Approved in March 2006, the Pradhan Mantri Swasthya Suraksha Yojana (PMSSY) seeks to augment the availability of affordable healthcare facilities across the country and improve the state of medical education in the under-served States. With the growing reach of healthcare facilities, prevention and treatment of non-communicable diseases is likely to be better managed.

Around 20 per cent of the Indians suffer from mental ailments during their lifespan and at any point of time there are 72 million people suffering from some form of mental illness. The Mental Health Care Bill passed by Rajya Sabha in August this year aims at providing universal access to mental healthcare. The comprehensive plan includes modernising the existing facilities, enabling hospitals to start providing mental healthcare, reaching out to vulnerable groups and decriminalising suicide.

Target 5: Strengthen the prevention and treatment of substance abuse, including narcotic drug abuse and harmful use of alcohol

Around three million people have been roughly estimated to be dependent on drugs (0.3 per cent of the population). India’s proximity to the major poppy growing areas of the world makes it vulnerable to drug abuse along the transit and trafficking routes. Indian government identifies the following as high risk groups: commercial sex workers, transportation workers, street children, and people living in the North-eastern states/border areas and opium growing regions of the country.

India’s approach to the problem of substance abuse is collaborative in nature. The Scheme for Prohibition and Drug Abuse Prevention under the Ministry of Social Justice and Empowerment assists close to 400 voluntary organisations for the maintenance of more than 400 Integrated Rehabilitation Centres for Addicts (IRCAs). National Centre for Drug Abuse Prevention (NC-DAP) under the National Institute of Social Defence manages training, research and documentation in the field of drug abuse prevention. All the other concerned ministries are integrated for supplementing the initiatives taken by each other. International collaborations have been done with UNODC and ILO for preventive measures and to address the issue of rehabilitation.

Target 6: By 2020, halve the number of global deaths and injuries from road traffic accidents

As per World Bank, with more than 200,000 annual fatalities India’s contribution to global traffic deaths stands at 15 per cent. The new draft Road Transport and Safety Bill, 2014 aims at making Indian roads safer by increasing penalties for violations and mandating stringent action against violators. Additionally, the government is mulling over constituting a Highway Traffic Regulation and Protection Force. A motor accident fund is also proposed to be set up for providing mandatory insurance to all road users. Along with these, setting up of an all-India road accident emergency telephone number is also in the pipeline. With road fatalities and injuries being included in the SDGs, the efforts in this direction are expected to be intensified and integrated with other initiatives.

Target 7: By 2030, ensure universal access to sexual and reproductive health-care services, including for family planning, information and education, and the integration of reproductive health into national strategies and programmes

Experts have given recommendations for linking all the programs and initiatives dealing with sexual and reproductive health, replicating the HIV, Malaria and TB model, for better implementation and closer monitoring.

The Pradhan Mantri Swasthya Suraksha Yojana, in three phases, will see establishment of eight new All India Institute of Medical Sciences (AIIMS) like facilities and upgradation of 29 existing medical colleges. This will bring India close to the target of universal health coverage by addressing the regional and economic imbalances. Six AIIMS have already been established in Bhopal, Bhubaneswar, Jodhpur, Patna, Raipur and Rishikesh in the first phase. In addition to this, mobile healthcare units in collaboration with private sector/NGOs have been bringing basic medical facilities to the doorstep of the needy sections of the society.

From Jan Aushadhi initiative for providing low cost generic drugs to exploring the idea of developing thermostable vaccines, India is gearing towards providing affordable and timely healthcare to every citizen. In the first phase of Jan Aushadhi initiative 504 essential medicines are to be sold in the retail market at low prices for lessening the financial burden on patients and their families. The government is giving fresh impetus to this initiative. In another important policy intervention, the government provides health insurance services to each and every citizen of the country. Insurance initiatives like Rashtiya Swasthiya Bima Yojana for BPL families, ESIS to worker population, CGHS for central government employees, Aam Admi Bima Yojna for 46 occupational groups including landless farmers and Universal Health Insurance Scheme for poor families aim at taking the
burden of treatment off the shoulders of the diseased and distressed.

Target 9: By 2030, substantially reduce the number of deaths and illnesses from hazardous chemicals and air, water and soil pollution and contamination

The CAG report of Performance Audit of Water Pollution in India, 2011-12 paints a grim picture of the country’s water bodies. In the absence of strict provisions in the policy and legislative frameworks, the pollution levels are alarmingly high with little or no signs of improvement. Situation is similarly worrying with respect to air pollution. With Prime Minister Narendra Modi launching the National Air Quality Index in April 2015, data for 11 cities is now available in the public domain. The health implications of the same are robust drivers to make the central and local governments accelerate their policy and legislative
initiatives.

Looking forward, healthcare priorities for India are likely to be more clearly defined and worked upon. Dr Henk Bekedam, WHO Representative to India said earlier this month, “Stepping up investment in public healthcare is pivotal to sustaining India's economic growth. Investing in health is investing in India's growth story." Beginning 2017, all eyes shall be on Finance Minister Arun Jaitely for his annual budget allocation for healthcare.