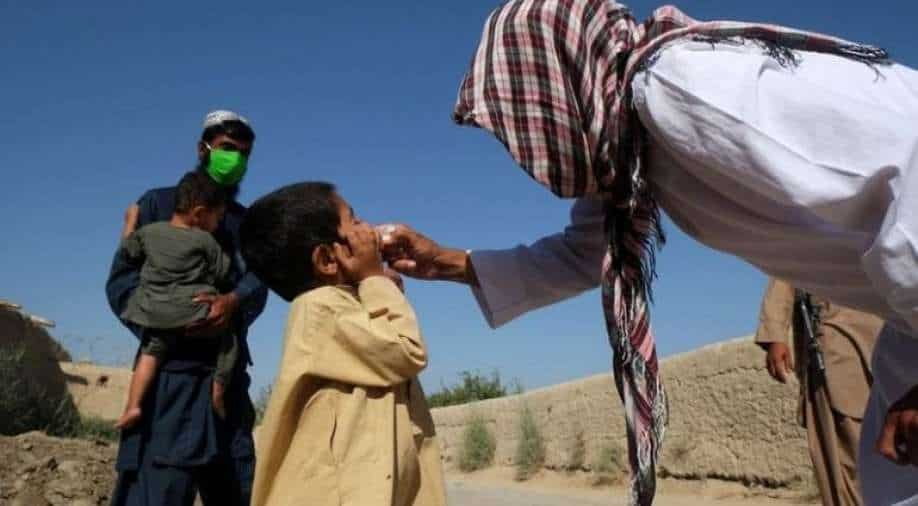 A health worker administers the polio vaccine to a child. Photograph:( IANS )

Polio teams were frequently targeted by insurgent groups in Afghanistan until the Taliban's takeover of the country last year, when the hardline Islamist group said it wanted to work with the UN to stamp out the disease

Eight members of polio vaccination teams working to eradicate the crippling virus in Afghanistan were killed on Thursday in four separate attacks, the United Nations said.

Polio teams were frequently targeted by insurgent groups in Afghanistan until the Taliban's takeover of the country last year, when the hardline Islamist group said it wanted to work with the UN to stamp out the disease.

In the past polio campaigns in Afghanistan -- and neighbouring Pakistan -- were accused of being fronts for spying, while some clerics said the vaccine was a conspiracy to sterilise Muslims.

"We are appalled by the brutality of these killings, across four separate locations," the UN said in a statement.

"This senseless violence must stop immediately, and those responsible must be investigated and brought to justice. These attacks are a violation of international humanitarian law."

The Taliban said they had "received the news" of the incidents and were trying to get more information.

"Our policy is clear, we want to vaccinate and protect all the children in Afghanistan under the age of five," Javid Hajir, a spokesman for the Ministry of Health, told AFP.

The UN said one person was killed in Takhar province in the far north, and seven in neighbouring Kunduz province -- including four in the provincial capital Kunduz city.

They were engaged in house-to-house visits or on their way to begin campaigns, the UN said.

Also read | Women workers must cover up 'even with a blanket', say Afghan Taliban

Afghanistan and Pakistan are the only two countries in the world where polio has not been eradicated, although Pakistan last month reported a year without a case for the first time in history.