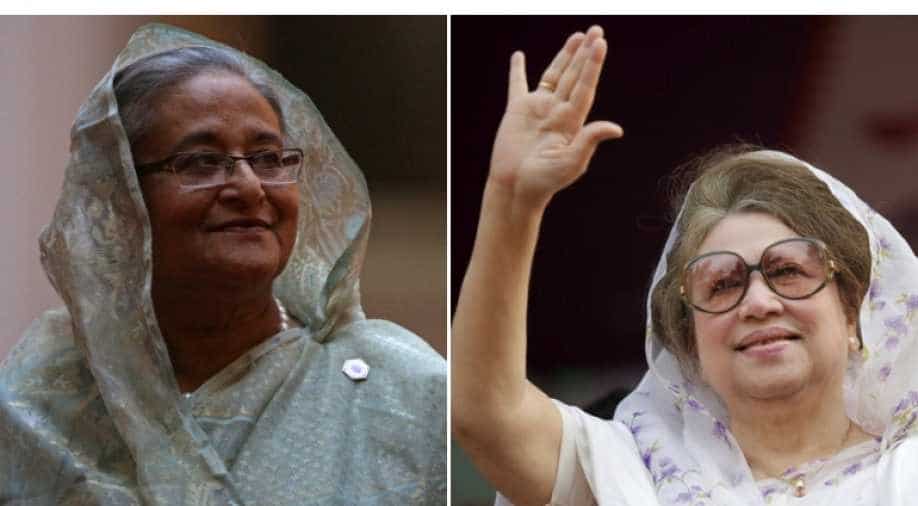 The two women - Hasina, the 71-year-old daughter of the country's founding leader Sheikh Mujibur Rahman, and Zia, the 73-year-old widow of military dictator Ziaur Rahman, have been political royalty - begums - since the 1980s.

The year 2018 was an eventful one for Bangladesh which is going to crucial polls on Sunday but it may not see the "battling begums" in direct contest as jailed ex-premier Khalida Zia is unable to challenge Prime Minister Sheikh Hasina, whose government maintained steady ties with India.

The two women - Hasina, the 71-year-old daughter of the country's founding leader Sheikh Mujibur Rahman, and Zia, the 73-year-old widow of military dictator Ziaur Rahman, have been political royalty - begums - since the 1980s.

While Hasina is seeking re-election for a fourth term as the prime minister in the upcoming polls, her rival Zia, who is reportedly partially paralysed, faces an uncertain future in a Dhaka jail.

Zia, the two-time former prime minister, boycotted the 2014 elections, saying it was rigged in favour of Hasina and her ruling Awami League party. Zia's Bangladesh Nationalist Party (BNP) alleges that the AL-led government is engaged in a crackdown against its workers aiming at derailing its election campaign.

The first woman prime minister in the country's history and second in the Muslim-majority countries after Pakistan's Benazir Bhutto, Zia was in November ordered by a court to stay behind bars for more than a decade for graft. The convictions mean she cannot contest the poll.

Zia's supporters say the charges against her are politically motivated. Her son Tarique Rahman, the acting party head, was also sentenced to life behind bars.

The emergence of the National Unity Forum (NUF) as a joint opposition platform was a landmark event in Bangladesh's political front this year after Zia's imprisonment in February.

The alliance created hope for the BNP to have a pre-polls dialogue with the government. A former Awami League stalwart and eminent jurist, Kamal Hossain leads the NUF. He, however, preferred not to contest the polls himself.

Several Western diplomats and political analysts inside the country said the emergence of the NUF created a win-win situation for all stakeholders and paved the way for the BNP to return to Parliament.

Unlike the 2014 elections, major foreign powers appeared appreciative of the current political course despite their worries about the rights situation in the country.
The zero use of the anti-India rhetoric during the election campaign came as a respite to New Delhi, which in the past was accused of intervening in the country's politics.

Analysts said the BNP over the years preferred to get New Delhi as an ally, burying the old hostile attitude, a development which some of them preferred to call "bipartisan consensus" regarding the next-door neighbour.

Bangladesh's ties with India this year grew steadily, with high-level visits from both sides. Hasina visited India in May during which she held talks with Prime Minister Narendra Modi.

The last few years have been a "golden chapter" in India-Bangladesh relationship when complicated issues of land and coastal boundaries were resolved, Modi said at the time.

Echoing his views, Hasina hoped that the remaining issues will also be resolved in a "friendly atmosphere".

Under the Revised Travel Arrangement (RTA)-2018, freedom fighters and elderly Bangladeshi nationals will get five-year multiple visa from India.

During the year, the two countries launched many development cooperation projects, including the construction of the Akhaura-Agartala rail line and the restoration of Kulaura-Shahbazpur section of railway line.

The two countries jointly inaugurated the construction of a 130-km Bangladesh-India Friendship Pipeline between Siliguri in West Bengal and Parbatipur in Dinajpur. India also announced a three-year visa for Bangladeshi students willing to study in the country. The issue of Teesta water sharing issue, however, remained unresolved.

Most analysts feel that the crucial bilateral ties now witness a new trajectory since the Awami League assumed power in 2009 and they expect the relations to grow further in 2019 irrespective of the outcome of Bangladesh's elections.

The Rohingya crisis remained a major issue in Bangladesh this year. The country rallied huge international support to put pressure on Myanmar to take back minority Muslim Rohingyas who fled the country following a military crackdown.

After several rounds of talks, Myanmar agreed to start the repatriation. But the planned beginning of the repatriation of thousands of Rohingyas which was set for November 15 faced a setback amid concerns over their safety once they return to their homeland in Myanmar's Rakhine state.

Some foreign relations analysts said Dhaka was a bit upset with India's role in the Rohingya crisis particularly for not mounting pressure on Myanmar to take back 1.1 million people, who were forced to take refuge in Bangladesh.

Bangladesh set a bad track record in terms of human rights this year, drawing massive criticism for incidents of "forced disappearances" and deaths in the hands of law enforcement agencies.

As Bangladesh is getting ready to install a new government, the new year promises a lot of action not only on the political front but also on foreign policy front.