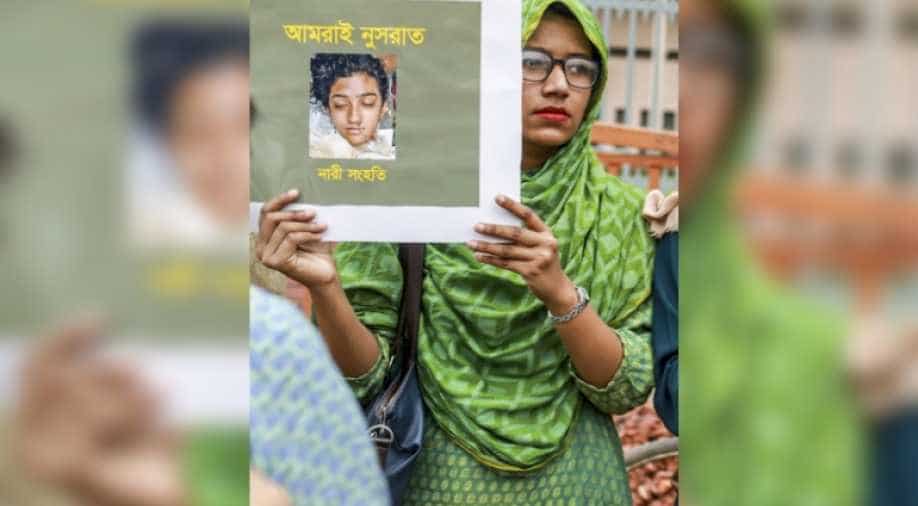 A Bangladeshi woman holds a placard with a photograph of schoolgirl Nusrat Jahan Rafi at a protest in Dhaka. Photograph:( AFP )

The killing of Nusrat Jahan Rafi in April sparked protests across the South Asian nation, with the prime minister promising to prosecute all those involved.

A senior Bangladesh police officer has been arrested for failing to properly investigate the shocking murder of a teenaged girl who was ordered burned to death by a teacher she accused of sexual assault, officials said.

The killing of Nusrat Jahan Rafi in April sparked protests across the South Asian nation, with the prime minister promising to prosecute all those involved.

At least 16 people, including the teacher, have been charged in connection with the killing and could face the death penalty if convicted.

Rafi was lured to the rooftop of an Islamic seminary she attended where her attackers asked her to withdraw a sexual harassment complaint filed with police against the head teacher.

When she refused, she was doused in kerosene and set on fire. She died five days later, her death highlighted an alarming rise in sexual harassment cases in Bangladesh.

An investigation by authorities later found Moazzem Hossain, the police chief of the town where Rafi was killed, had not properly dealt with the complaint the teenager made.

Bangladesh police spokesman Sohel Rana confirmed in a text message to AFP that Hossain had been arrested.

He and two other inspectors have been suspended by the police department.

Rafi went to the police in late March to make allegations of sexual harassment against the head teacher. A leaked video showed Hossain registering her complaint, but dismissing it as "not a big deal".

Hossain was accused of illegally filming the video, which was later circulated on social media platforms. He went into hiding after a court issued a warrant for his arrest.

At least five people, including three of Rafi's classmates,tied her up with a scarf before setting her on fire. The plan was to pass the incident off as a case of suicide.

Rafi suffered burns to 80 per cent of her body and died in hospital on April 10.

She recorded a video before her death, repeating her allegations against the teacher.