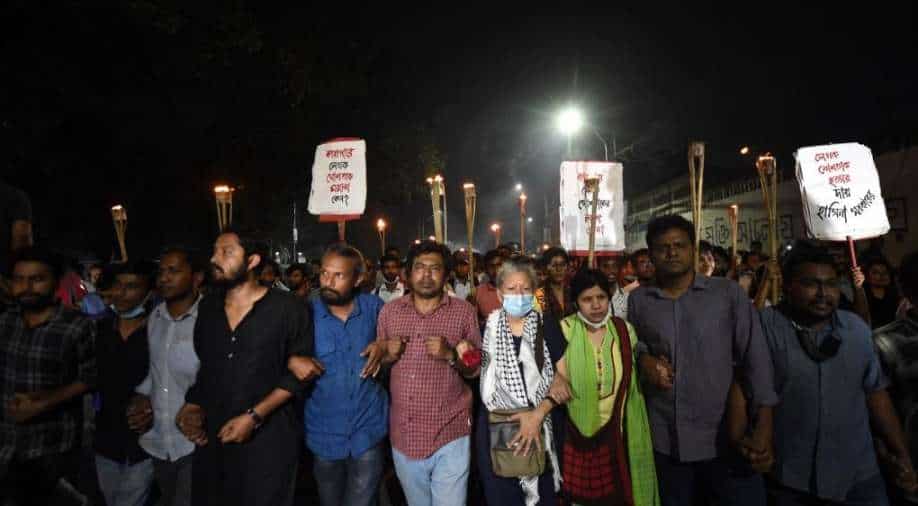 Activists and students take part in a torch procession following the death in jail of Bangladeshi writer Mushtaq Ahmed months after his arrest under internet laws which critics say are used to muzzle dissent, in Dhaka on February 26, 2021. Photograph:( AFP )

Ahmed's prosecution under the country's Digital Security Act was an example of the "worst form of repression", said Saad Hammadi of Amnesty International.

Massive Protests erupt in Dhaka after death of writer Mushtaq Ahmed inside a high-security prison, who was arrested last year on charges of violating the stringent Digital Security Act.

Mushtaq Ahmed was among four people detained last May after he criticised the government's handling of the coronavirus pandemic.

The 53-year-old, a crocodile farmer who became a well-known government critic, was charged with spreading rumours and conducting "anti-state activities" on Facebook.

Jail authorities told AFP he died on Thursday evening after passing out at a high-security jail outside of the capital Dhaka.

Ahmed had not been suffering from any major illness, said prison chief Mohammad Ghiasuddin.

"We saw him taking only gastric tablets," he added.

Hundreds of people rallied in Dhaka on Friday to condemn Ahmed's death, while his lawyer Jyotirmoy Barua demanded an independent investigation.

Ahmed's prosecution under the country's Digital Security Act was an example of the "worst form of repression", said Saad Hammadi of Amnesty International.

"No one should have to die solely for exercising their right to freedom of expression," he added.

Around 2,000 cases have been filed under the law since it was enacted by the government of Prime Minister Sheikh Hasina in 2018, according to Amnesty.

Many of the country's leading editors and senior journalists have been targeted for prosecution under the law, it added.