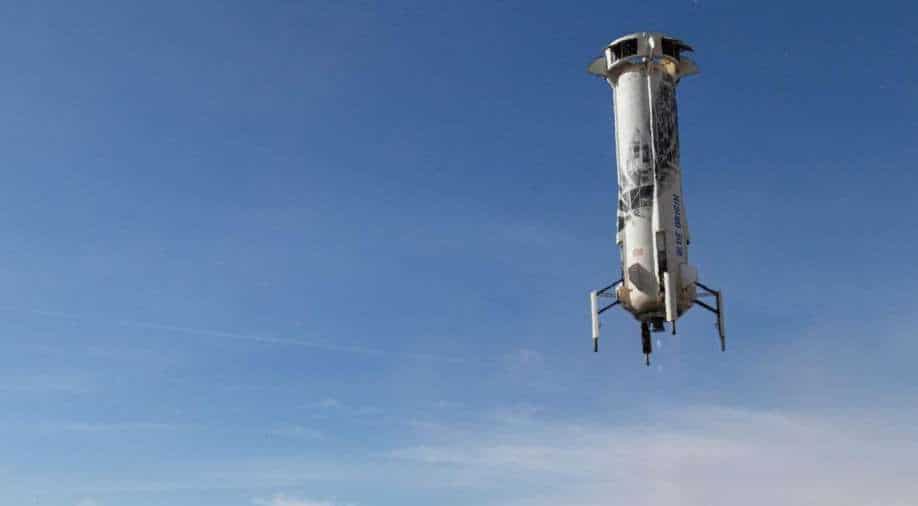 A photo provided by Blue Origin, the company started by Amazon’s chief executive Jeff Bezos, of its reusable New Shepard rocket landing at their facility in West Texas after a flight in 2019 Photograph:( Twitter )

Blue Origin is not a new company, Bezos founded it in 2000, but for most of its existence, it operated in secret without generating much revenue

West Texas is not quite like the moon. But it can serve as a handy stand-in.

Last week, Blue Origin, the rocket company started by Jeff Bezos, the chief executive of Amazon, launched, and landed, its small New Shepard rocket and capsule for the 13th time as part of tests to verify safety before any passengers climb aboard.

One day, this will be New Shepard’s main business: flying well-to-do people above the 62-mile altitude generally considered the beginning of outer space where they will experience a few minutes of weightlessness as the capsule arcs.

Blue Origin is not a new company, Bezos founded it in 2000, but for most of its existence, it operated in secret without generating much revenue. Three years ago, Bezos said he was selling $1 billion a year in Amazon stock to finance Blue Origin’s research and development. And he has declared broad ambitions for its business, such as competing with Elon Musk’s SpaceX and others in the orbital launch business, building a moon lander for NASA astronauts and eventually making it possible for millions of people to live and work in space.

But the cargo of last Tuesday’s launch from a test site near Van Horn, Texas, shows that the company is finding a more modest business in the short term: turning the reusable New Shepard rocket and capsule into an effective, and profitable, platform for testing new technologies and performing scientific experiments.

“It was fantastic,” said Erika Wagner, Blue Origin’s payload sales director, who was in West Texas. “We were watching across the valley and watching the rocket climb up.”

Tucked under the collar at the top of the booster on the launch were prototypes of sensors that could help NASA astronauts safely reach the lunar surface in a few years. It is part of NASA’s Tipping Point program, which seeks to push innovative technologies.

“Although not identical to a lunar lander, it is representative in that full-flight profile of approaching at a high rate of speed, and then throttling up an engine and doing a propulsive landing,” said Stefan Bieniawski, who leads the Blue Origin side of the partnership with NASA. “In fact, I think we’re actually at slightly higher speeds than you would be approaching the moon. So it gives a little bit of a stress test for some of these sensors.”

Unlike NASA’s Apollo missions from 1969 to 1972, which visited different parts of the moon, the space agency’s current Artemis program aims to make repeated visits near the lunar South Pole, where eternally shadowed craters contain large amounts of water ice. That will require the ability to land close to the same spot again and again.

To that end, NASA’s Langley Research Center in Hampton, Virginia, has spent years developing a system that bounces light off the surface to measure altitude and velocity of a descending spacecraft. This technology, lidar — short for light detection and ranging — is similar to radar, but it should be able to provide more precise readings.

A second NASA system aboard the flight was a test of what is known as terrain relative navigation. Because there are no Global Positioning System satellites orbiting the moon, a spacecraft has to rely on its own smarts to determine its exact location. With this navigation system, a computer compares images taken by a camera with those stored onboard to determine its location.

The navigation system was turned on close to where the New Shepard booster reached its highest point.

“The terrain navigation does not sit there and say, ‘Hey, I see a crater,’ ” Bieniawski said. “It’s really looking for contrasts in the scene. And in that way, it really doesn’t care whether it’s on the moon or whether it’s here on Earth.”

NASA paid Blue Origin $1.5 million to mount its systems on two flights of New Shepard. The second flight will add another lidar instrument that will create a three-dimensional map of the landscape below in order to identify and avoid obstacles.

“Our goal is to ready a plug-and-play precision landing system that NASA and industry can use based on a mission’s specific need,” Jim Bridenstine, the NASA administrator, said in a statement. “This integrated New Shepard test will put us on that path, giving us unmatched intel about how the sensors, algorithms and computer work together.”

While there were no people in the New Shepard capsule for the flight, it was not empty. It carried NASA-financed science experiments as well as experimental cargo from private companies. New Shepard flights have already carried more than 100 payloads to the edge of space.

“We make money on every flight,” said Bob Smith, the chief executive of Blue Origin.

Wagner of Blue Origin said the scientists came to West Texas and were excited to watch the launch and start digging into the results the same day. “They’re just bouncing up and down on their toes,” she said.

The experiments on last week’s flight included the second iteration of a project from Daniel Durda, a scientist at the Southwest Research Institute in Boulder, Colorado. He called it BORE II, where BORE is a simple acronym for Box of Rocks Experiment.

He is trying to develop a system that can scoop up samples of dirt from an asteroid. BORE II contains crushed-up material that is similar in composition to certain carbon-rich asteroids.

During the weightless portion of the flight, a tetrahedron-shaped collection device, which Durda called a starfish, will unfold. Magnets mounted on the outer triangles — the arms of the starfish — should attract and hold onto some of the crushed rocks. The device will then fold up again, trapping the material.

“It’s kind of a biomimicry thing if you think about it,” Durda said. “The way starfish feed is they kind of extrude their stomach out and they pull them back in and collect what they’re doing. That’s kind of what we’re doing here.”

By testing the design on a suborbital flight, Durda can find out how much material can be collected and whether the apparatus operates without jamming.

“It’s the very first step in understanding how you might incorporate a sampler mechanism like this into a spacecraft rendezvous mission where you dump maybe dozens, many dozens of these little things across the surface of an asteroid,” he said.

With the new suborbital vehicles that fly repeatedly, the price of getting to space is much lower for NASA as well as for academic and private scientists.

The most popular option, Smith said, is what Blue Origin calls a single storage locker. “That starts around $100,000 for about 25 pounds and something the size of, let’s say, a microwave,” he said. “But we also have many payloads that we use with students that go as low as $8,000.”

The suborbital research is also a sign that Blue Origin is making a turn to becoming a profitable business as it prepares to sell tickets to space tourists. It has yet to announce a date or price for those flights.

“It’s been a lot of growth in facilities personnel actually trying to understand how do we run this much more like a business as opposed to a research organization,” Smith said. “We’ve also gone from virtually zero revenue to now making hundreds of millions of dollars of revenue annually.”

The company has competition for the market of sending experiments to space. Richard Branson’s Virgin Galactic, which also plans to send space tourists on suborbital jaunts, has been flying experiments during its test flights. One from University of Florida scientists, for example, tested imaging technologies that capture the reaction of plants — what genes are turned on and off — to the stresses of spaceflight. (The same scientists had another iteration of the experiment aboard last week’s Blue Origin flight.)

Virgin Galactic’s space plane, known as SpaceShipTwo, is flown by two pilots, so it has carried people to space, but it will not fly paying passengers until next year.

“The whole view of using these vehicles for research purposes has moved into the mainstream, and NASA has now been funding a lot of that kind of work,” said S. Alan Stern, associate vice president of the space science and engineering division at Southwest Research Institute who has been selected by NASA to accompany his research on a future Virgin Galactic flight.

By operating the experiment himself, Stern said he would gain direct experience with how these materials behave on an asteroid.

“I think it’s very important for us to understand the conditions on their surfaces at a ‘gut instinct’ level the same way a field geologist walking a Western desert landscape here on Earth does,” Durda said.

“We’ve attained that level of familiarity in just about every other aspect of field and laboratory science,” he said. “It’s long past time for space scientists to be able to work with that same enabling benefit.”