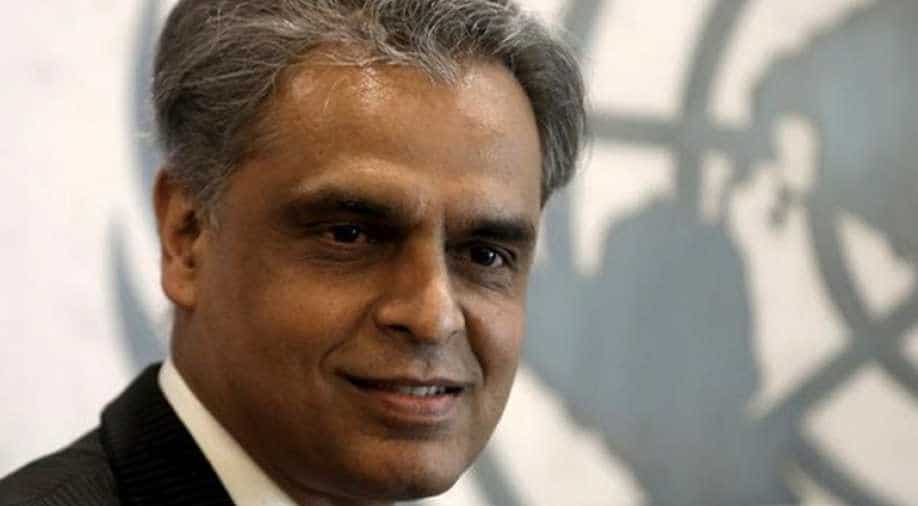 Speaking exclusively to WION's Diplomatic Correspondent Sidhant Sibal in New York, India’s envoy to United Nations Syed Akbaruddin said that the reason why India sent a young diplomat to answer Imran Khan’s UNGA speech was to reflect a new India and bring to table energy of a young person. He also spoke on UNSC reforms, issue of terrorism

Speaking exclusively to WION's Diplomatic Correspondent Sidhant Sibal in New York, India’s envoy to United Nations Syed Akbaruddin said that the reason why India sent a young diplomat to answer Imran Khan’s UNGA speech was to reflect a new India and bring to table energy of a young person. He also spoke on UNSC reforms, issue of terrorism.

WION: India sent a young diplomat Vidisha Maitra to reply to Pakistan using the “right of reply” option. What was the intent behind it?

Syed Akbaruddin: You know, we are a country with a tradition, a country with a very consistent approach. We also know Pakistan and its approach very well. So if its focus is on one issue, and this issue with which we are very familiar with, we always field our young diplomats who are confident, who reflect a new India, who have the ability to articulate India’s position in very nuanced manner but also very forcefully. They bring to the table the zest and the energy of the young and an understanding of the issues which is historical in nature. It is a tradition for us to field a young officer to clearly indicate and articulate India’s consistent position.

WION: How do see the speech of Pakistani PM from the UNGA podium?

Syed Akbaruddin: So, India’s articulation across the UN was on themes that was listed by the President of the General Assembly. If other countries want to stray away from that it is their choice. UN is a place where people work in partnerships. Partnerships can be forged on issues of common interest, not on individual interest. So if Pakistan wants to project an issue of individual interest, this is their choice, they wasted it, as you said.

WION: What was PM Modi’s big message from his speech at UNGA?

Syed Akbaruddin: Global development is sustainable development. Climate action is a key part of that development. PM Modi has made it clear that India’s ambition levels for sustainable development far exceeded with what was thought of even a decade ago. PM’s mention that from the high target we have already set off in terms of renewable energy of 175 GWs, we are now moving to a target of more than 400 GW. That is considerable, similarly on climate action, on whole range of front we are active, including working with the UN, we have set up Gandhi Solar park. Globally we are trying to work we partners to form a collation for disaster resilient infrastructure, so we are working in multifaceted ways, in different ways as well as doing our focus against climate action in India.

WION: India sets record in the number of bilaterals held.

Syed Akbaruddin: Never before have we been intensely engaged in a manner that we did during this week. PM had 17 bilateral engagements and number of plurilateral level, we have engaged in leaders levels in an unprecedented manner. For the first time, we have plurilateral meetings of India engaging with regions. It has never been done before. For the first summit between India and CARICOM was held. The CARICOM was, we all are familiar with there cricketing abilities. But there are a lot more commonalities between CARICOM and India. Similarly, Indopacific has become a major issue of political importance. This was the first effort of India engaging with Pacific countries on the sidelines of UNGA. In addition, Foreign Minister Jaishankar engaged in as many as 40+ bilateral meetings and a host of plurilateral meetings—The brick, the SAARC, G4, etc. MoS MEA was engaged with the NAM, the commonwealth, the G77. So I told you it is unprecedented in its intensity, in its expanse, in its focus. It is an expression of India’s willingness, and expansiveness to embrace the world and multilateralism.

WION: What were the key takeaways for the world?

WION: How big is the issue of terror at the UN? What is the world doing about it?

Syed Akbaruddin: There are two ways. One is the normative way of working towards a normative agreement on the issues of terrorism and that is the convention. But there is action-oriented way and that way has progressed and it has progressed considerably because terrorism is considered antithetical to everything that UN stands for or, countries in UN stand for and they have progressed in many, many practical ways to counter terrorism through UNSC resolutions and resolutions through other bodies. So, it depends on how you see it. Normative efforts have been stalled but practical efforts continue. For example this year, you see it for the first time, an attack on Indian paramilitary troops was condemned by the United Nations. It has never happened before. Similarly, after a period of 10 years, Masood Azhar was listed as a terrorist individual. All these things show on the practical front we are moving ahead. And new areas are emerging and how do we tackle the promotion of hate speech and violent extremism and terrorism through cyberspace. There was a meeting of leaders, where they focused on efforts we need to do to prevent the use of internet and cyberspace for promoting violent extremist narrative. This is a new theme and was led by the king of Jordan and Christchurch call countries and President of France made special mention of India’s participation in this and PM Modi’s interest in this and so this is growing area of convergence.

WION: How hopeful are you about UNSC reforms?

Syed Akbaruddin: We have to understand that the global situation today is one of great volatility. It is one where things are not being done. The world is changing and it is changing dramatically and exponentially. UNSC has been resistant to change. Organizations that don’t change, may become less and less effective. It is a call for them to take, do they want to be relevant to the issues of the day, to addressing and resolving the primary issues that impact global peace and security or other ways will be found. Contemporary reality has to be adjusted. It is the norm in every segment of life for example, in business, companies dominated 70 or 100 years ago are not dominant today. That is the law of nature, it will happen with time but how it happens, when it happens, the situation may arrive. Crisis always required to change. Today there is a crisis, UNSC can’t act on whole hosts of issues. People are bypassing it. The last big institutional change was on the basis of the cataclysmic event. Change happens, sometimes by chance, it happens in ways you do not understand, but it will happen.