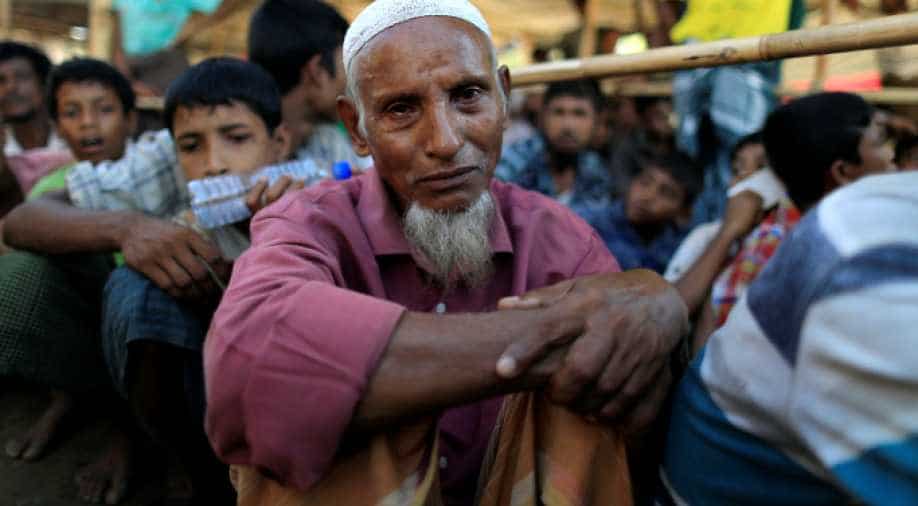 A Rohingya refugee waits for humanitarian aid to be distributed at the Balukhali refugee camp in Cox's Bazar. Photograph:( Reuters )

The Supreme Court will today hear a Public Interest Litigation filed by two Rohingya Muslims that challenges the Indian government's decision to deport around 40,000 people of the community.

The three-judge bench, headed by Chief Justice Deepak Misra, had earlier said it will hear in detail various aspects of the case including the government's preliminary objection that the issue falls under the domain of the executive and cannot be decided by the judiciary.

The Supreme Court had also asked the central government and the Rohingya Muslims to desist from making emotional arguments and personal attacks and to file documents, including international conventions.

The top court made it clear that it will hear arguments only on the points of law, ANI reported.

In their petition, the two Rohingya immigrants, Mohammad Salimullah and Mohammad Shaqir, argue that they had taken refuge in India after escaping from Myanmar due to widespread discrimination, violence and bloodshed against the community there.

They contend that many Rohingyas, who had fled to India after the earlier spate of violence, are settled in Jammu, Hyderabad, Haryana, Uttar Pradesh, Delhi-NCR and Rajasthan.

Besides Chief Justice Dipak Misra, the bench comprises of Justices AM Khanwilkar and DY Chandrachud,

The Indian government earlier told the top court that besides being a security threat because of links to the ISI and the IS, Rohingyas will exhaust natural resources meant for Indian citizens resulting in hostility and social tensions.

Another Rohingya refugee then filed an affidavit in the Supreme Court of India, denying the Indian government's claims that the Muslim community from Myanmar has terror links with Pakistan's Inter-Services Intelligence (ISI) and the Islamic State.

The affidavit states that the Rohingyas should be treated at par with Tibetan and Sri Lankan refugees.

Meanwhile, a group of civil society activists have written a letter to Prime Minister Narendra Modi calling for a "new and bold vision" to end the Rohingya crisis and not to deport the 40,000 refugees and asylum seekers currently residing in India.

The activists, which include human rights lawyer Prashant Bhushan, Member of Parliament Shashi Tharoor, former Union minister P Cgidambaram and journalist Karan Thapar, ask to India to "exert its diplomatic clout to pressurise the Government of Myanmar to end the security crackdown in Rakhine."