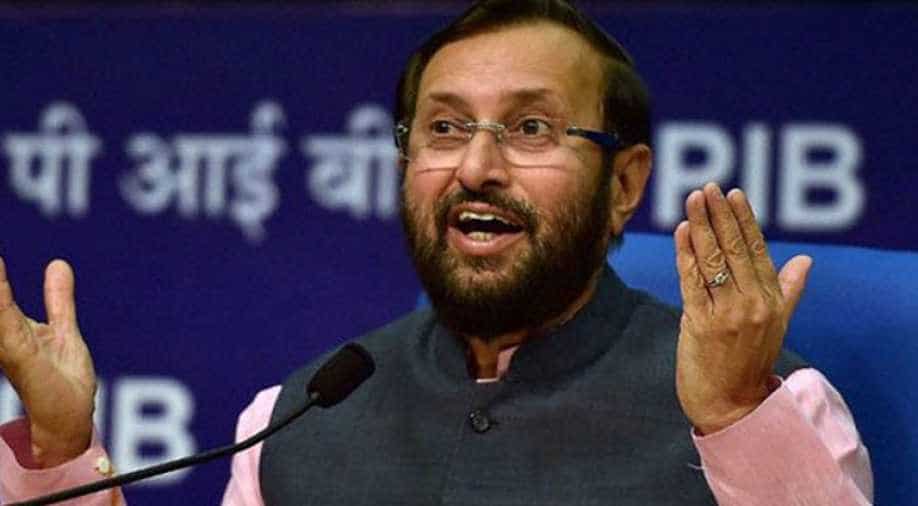 He also accused the Congress of "indirectly supporting" Maoists and said the BJP governments at the Centre and in Chhattisgarh, where elections would be held next month, were determined to finish the Naxal menace in the coming years.

No Congress leader was available for comments.

"When Chhattisgarh was formed and the Congress was in power in the state, Naxalism was at its peak. Now it has come down to one-third of the total area which was in control of Naxalites earlier," the human resource development minister said in a press conference in Raipur.

Javadekar criticised Tharoor for his reported remark Saturday in which he claimed that an unnamed RSS source had told a journalist that "Prime Minister Modi was like a scorpion sitting on a Shiv Linga who cannot be removed by hand or hit with a chappal (slipper)".

When asked about the remark, Javadekar said, "The Congress is wondering on how to take on Modi at the political level and therefore it has resorted to abusing. Rahul baba keeps on abusing daily. People will do only those things which they know. Shashi Tharoor is a bit sophisticated but he has also come down to the 'bichhu' remark."

"This was the Congress' advertisement in 1984. Rajiv Gandhi had brought this advertisement of calling the opposition a scorpion in the 1984 elections. It reflects the mentality of Congress," the Bhartiya Janata Party (BJP) leader claimed.

On Naxalism, he said 350 ultras were gunned down in the last five years in Chhattisgarh.

"Not only that, around 5,000 misguided tribals have surrendered while thousands of Naxals have been arrested," he said.

Hitting back at Congress leader Abhishek Manu Sanghvi who Sunday accused the Chhattisgarh government of being weak in tackling Naxalism, Javadekar said on the contrary the menace was at its peak during the Congress' rule in Chhattisgarh between 2000 and 2003.

"The Congress gave birth to Naxalism and it is the party which has encouraged it. The senior Congress leader indirectly supports Maoists. The party had appointed overground supporters of Maoist to the planning commission. It is the record of the Congress," he alleged.

"Their sympathy towards Maoist is not hidden. No decisive action was taken by the previous UPA government against Naxals. However, the action has been taken against Maoists since the last four years under Modi government and very soon the menace will be neutralised," he claimed.

"Chhattisgarh will be free from Maoist activities in the next three years. We are determined to finish the Maoist challenge in the next couple of years which is totally violent and undemocratic. Our policy is clear," the minister said.

Slamming Tharoor, Javadekar said the Congress leader had recently said Ram Mandir should not be built in Ramjanmabhoomi in Ayodhya because a mosque existed at that place.

"Tharoor has forgotten that Lord Ram was born in Ayodhya and his temple existed at the spot. A mosque was built after demolishing the temple.

"A public protest for Ram temple has been on from last 500 years. No BJP or Congress were there in the movement. It was a public protest. Now, the Supreme Court has fixed the dates of hearing (the Ayodhya title suit). We are hopeful that soon justice will be done and Ram Mandir will be built in Ramjanmabhoomi," he said.

When asked if Ram Mandir will be the BJP's agenda for Lok Sabha elections in 2019, Javdekar said, "Ram Mandir had never been an agenda of our politics or election but the temple should be built in Ramjanmabhoomi because people of the country want it. This is a national demand and sentiments of people are attached with it. This is a matter of faith of people and we never do politics over it."

Responding to a query on a row over a Supreme Court judgment allowing women of all age to visit Sabarimala shrine in Kerala, Javadekar said people reacted because orders were passed against public sentiments.

"Despite peaceful opposition by the devotees, the brutal treatment meted against them by the incumbent Communist government is severely criticised by the Bharatiya Janata Party," he added.