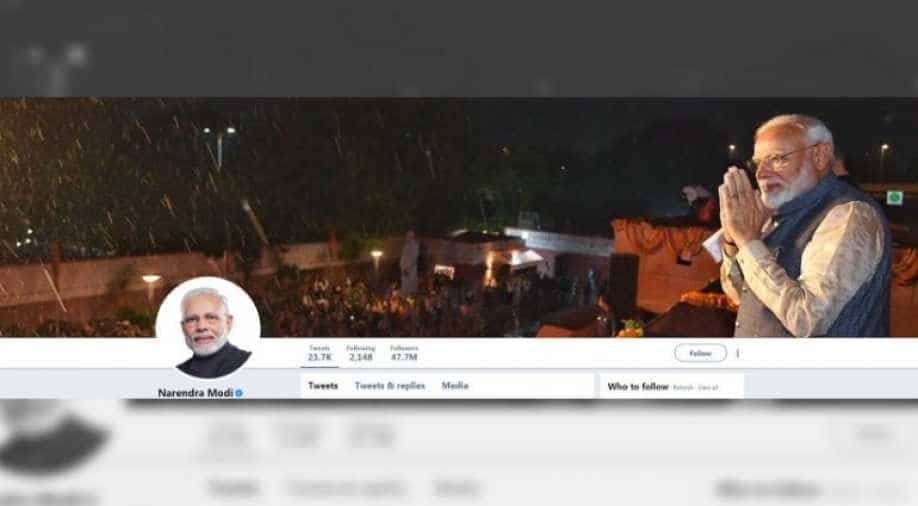 In his new photo, the 68-year-old stalwart is wearing a light blue shirt with black half-jacket, also known as Modi jacket.

The display picture of Narendra Modi's Twitter handle and Facebook was updated minutes before he took oath as the prime minister for the second time on Thursday.

In his new photo, the 68-year-old stalwart is wearing a light blue shirt with black half-jacket, also known as Modi jacket.

The cover photo of the Prime Minister on the micro-blogging site was also replaced with the image of his greeting the crowd with folded hands on the day he capped a landslide victory in the recently-concluded Lok Sabha elections and gave a victory speech from the dais of the BJP headquarters.

Narendra Modi is one of the most famous and active politicians on social media with nearly 48 million followers.

He joined Twitter in 2009 while he was the chief minister of Gujarat.

Narendra Modi took oath as the 15th Prime Minister of India in the forecourt of the Rashtrapati Bhavan in the presence of a battery of dignitaries, including foreign leaders.

Minutes, after he was administered the oath by President Ram Nath Kovind, the display and cover pictures of the Prime Minister Office (PMO) Twitter handle was also changed.

In the cover photo, the PM Modi is bowing down to respectfully touch the Constitution of India with his forehead, as he walked towards the podium after he was recently elected as the leader of the NDA and BJP parliamentary party last week.

The main image is his close-up in which the leader is wearing a saffron jacket on a white shirt.

Riding high on the planks of muscular nationalism, BJP stormed to power with 303 seats. Along with its NDA allies, the number swelled to 353 in the 543-member Lok Sabha.