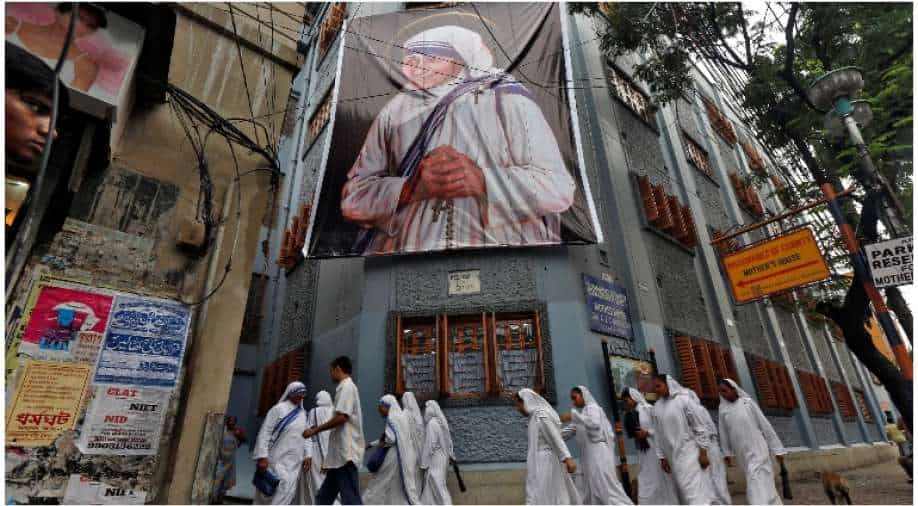 Nuns belonging to the global Missionaries of Charity, walk past a large banner of Mother Teresa ahead of her canonisation ceremony, in Kolkata Photograph:( Reuters )

Officials from the Mission, founded by Mother Teresa here in 1950, said that talks were on with auditors and experts to try and resolve the situation, indicating an appeal against the Centre's decision to cancel the license under the Foreign Contribution Regulation Act would be made

A day after a controversy broke out over the Central government refusing to renew the Missionaries of Charity's license to accept foreign donations, top officials of the organisation said work in its orphanages, hospices and shelters for the poor were "going on as usual."

Officials from the Mission, founded by Mother Teresa here in 1950, said that talks were on with auditors and experts to try and resolve the situation, indicating an appeal against the Centre's decision to cancel the license under the Foreign Contribution Regulation Act would be made.

"Work in all our orphanages, shelters, homes are going on as usual," the official said, adding that "in India we have been sustaining all these years with love and support of people in this country. So we will continue to serve the poor, destitute, ailing, aged with the same gusto in the same way."

A large portion of the money spent in India comes from donations sourced locally, officials said while pleading ignorance of the exact amounts received as donation locally or through foreign donations.

The MoC headquartered in Kolkata has over 250 bank accounts in the country for utilising foreign funds, another official of the organisation said.

"We are in talks with experts and auditors to resolve the situation," the official said. MHA said in a statement on Monday that renewal of the FCRA license was refused on December 25, Christmas day, for not meeting eligibility conditions, indicating that there issues with its audit report.

The Ministry also said 'no request has been received from Missionaries of Charity for review of this refusal of renewal.'

The cancellation order came within weeks after a police complaint was registered against the director of a children's home run by the Missionaries of Charity in Gujarat for allegedly attempting to convert inmates. The late Mother Teresa who was who was canonised a Saint in September 2016, and the Missionaries of Charity which she founded, shot into prominence after she won the Ramon Magsasay Peace Prize in 1962 and the Nobel Peace Prize in 1979.

The organisation today is spread over 139 countries and runs orphanages, homes for the dying and lepers besides looking after refugees, blind, disabled, aged, alcoholics, poor and homeless and victims of floods, epidemics and famine.