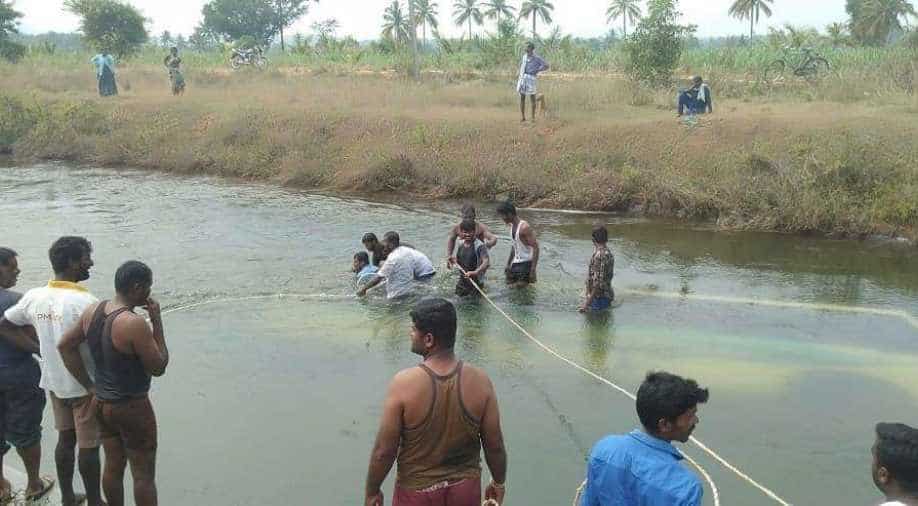 The bus was completely submerged following the accident.

Death toll in the Mandya bus mishap in Karnataka rose to 30, reported news agency ANI. Schoolchildren were among the dead after a bus plunged into a canal on Saturday.

News agency AFP quoting sources said police have retrieved 28 bodies from the private passenger bus after it veered off the road and fell into the canal.

I'm sorry to hear about the terrible bus accident in Mandya district of Karnataka in which over 20 people are feared dead & many others injured.

I extend my deepest condolences to the families of the deceased & pray for the speedy recovery of the injured.

The accident occurred in the noon near Kanakanamaradi of Pandavapura taluk, reports added.

25 people have died. I believe the driver was not driving properly, I will find out, take some more inputs: Deputy Karnataka CM G Parameshwara on the incident where a bus fell into a canal near Mandya in Karnataka today. pic.twitter.com/8aHjXLXhTM

Karnataka: At least 15 people died after the bus they were in, fell into VC canal near Mandya earlier today. The death toll is likely to rise. pic.twitter.com/1fFs4z7tOI

Rescue teams have reached the spot and rescue operation is underway, officials added.

The bus was completely submerged following the accident.

Deeply pained the bus accident in Karnataka’s Mandya. My thoughts are with the families of the deceased. May God give them strength in this hour of sadness: PM @narendramodi

Most of the victims are school children, they said, adding that they were returning home after half-a-day at school.

Karnataka: Chief Minister HD Kumaraswamy visits the site of the accident where 25 people died after a bus fell into a canal near Mandya; announces a compensation for Rs 5 lakh for the families of the deceased pic.twitter.com/IEFOQsV3SQ

Kumaraswamy expressed shock over the incident and rushed to the spot.