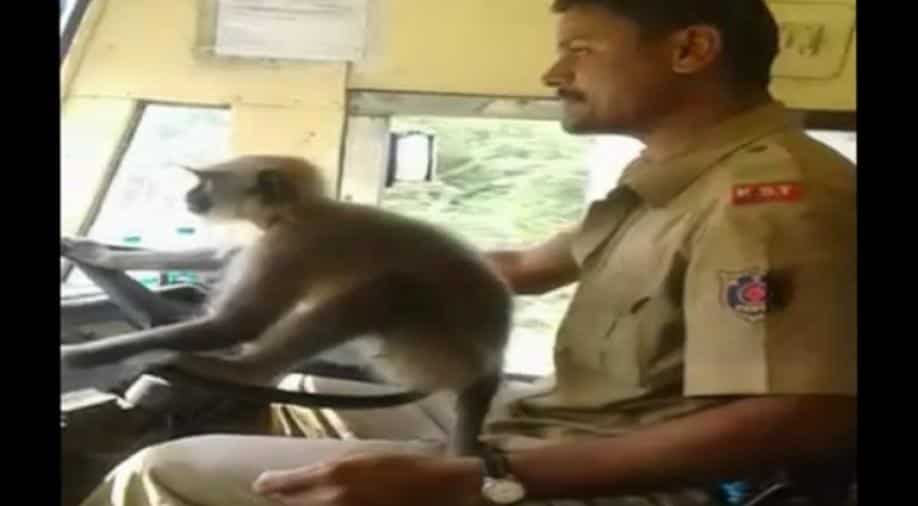 The 36-year-old driver is seen smiling and patting the langur monkey as it sits atop the wheel of the moving bus in footage shot by a passenger.

An Indian bus driver who let a monkey behind the wheel of his vehicle was suspended Saturday after a video of the incident went viral, sparking outrage and humour.

The 36-year-old driver is seen smiling and patting the langur monkey as it sits atop the wheel of the moving bus in footage shot by a passenger.

#WATCH Viral video from Karnataka's Davanagere of a KSRTC bus driver driving with a Langur perched on the steering wheel. The bus driver has been suspended for endangering the lives of the passengers. pic.twitter.com/RexZAfKZdr

"Driver M Prakash has been taken off duty for allowing the monkey to sit on the steering wheel and handle it," TS Latha, a spokesperson for the government's road transport corporation in southern Karnataka state told AFP.

"Passengers' safety is paramount and the driver cannot risk it by allowing a monkey on the steering."

The incident took place Monday but authorities only learnt of it after the video was shared on social media, Latha added.

There were around 30 on the bus at the time and none of them complained.

Local media reports say the langur boarded with a passenger and was at the wheel for almost ten minutes.

The bus was on its regular trip around Davangere, around 170 miles (270 kilometres) from regional capital Bangalore, when the incident took place.

"So sweet. Why suspend. He should have been warned not to repeat this," tweeted Parag Heda.

Another local quipped that the driver was in the wrong profession.

"Good that action is taken and he suspended, but clearly he is in wrong job. This man is a sensitive animal lover (see how langur trusts him) and could be an asset in wildlife-related jobs," he said.

The state transport authority said an investigation was being conducted.