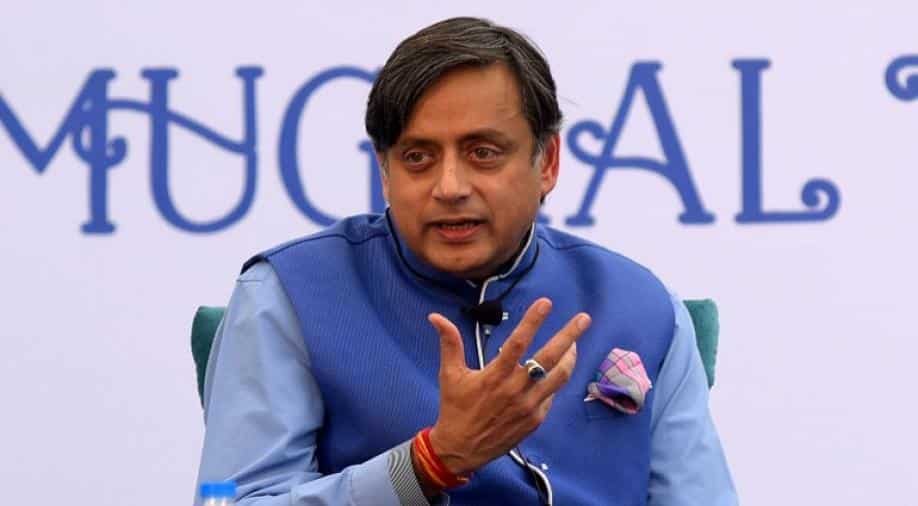 In photo: Indian politician and writer Shashi Tharoor speaks at an event on January 23, 2016. Photograph:( AFP )

Tharoor, who was speaking at an interactive session at the Indian School of Business (ISB) here, was replying to a question on India vis-a-vis US sanctions.

Congress MP Shashi Tharoor Wednesday said the country should make efforts to continue oil supplies from Iran against the backdrop of US sanctions as Iranian oil is the cheapest it could get.

The European Union (EU) has come up with a collective position saying they will work out their own arrangements to trade with Iran despite the sanctions and in Euros rather than in dollars, he said.

It will be interesting to see how that works and whether there is some way for a country like India, he said.

"Because, for us, Iranian oil is the cheapest and easiest oil to get," Tharoor, Chairman of Standing Committee on External Affairs, said.

It would be expensive for the country if it ends up buying American oil (stopping supplies from Iran), he said.

"I don't want to give you a definitive answer because I am not in the government. I don't know what the government is thinking," the Congress leader said.

Tharoor, however, said the country should resist for as long as possible having to stop supplies from Iran.

"Keep it going for as long as possible. But, in the end, explore and we can find another way of sustaining those supplies rather than giving in to the US and ending up having to pay much more for our oil," he said.

Tharoor, who was speaking at an interactive session at the Indian School of Business (ISB) here, was replying to a question on India vis-a-vis US sanctions.

About the recent Supreme Court verdict permitting women of all ages to enter the Lord Ayyappa shrine at Sabarimala, he said an issue that confronted the court in deciding the case was, "does the yardstick of rational legislation and constitutional reasoning apply to matters of faith."

A woman judge dissented in the matter saying Constitutional reasoning cannot be applied to issues of faith, he said.

Every time any historic change came, there were a lot of traditionalists who resisted, Tharoor said.

"...Those women who do feel very strongly that this is wrong, need not go. The court's judgement does not require anyone to go to Sabarimala. It just says if you want to go, you can no longer be prevented on the grounds of...I think that's the judgment that we all have to follow," he said.