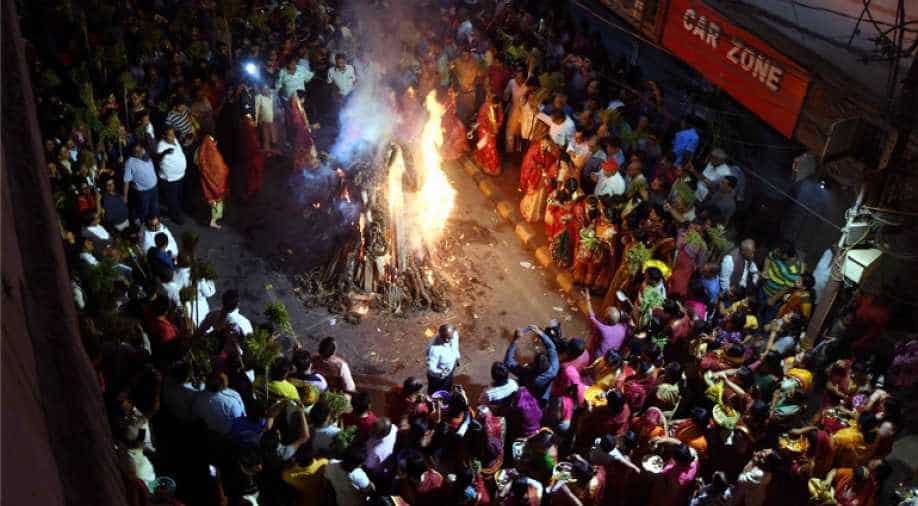 Pyres are burnt in Patna on the eve of 'Holi'. Photograph:( IANS )

India says Hafiz Saeed is the mastermind of the 26/11 attacks in Mumbai. Masood Azhar is the chief of the Jaish-e-Mohammed which had claimed responsibility for the February 14 Pulwama attack in which 40 CRPF personnel died.

Residents of a neighbourhood in the Bihar capital this time have put up effigies of Jaish-e-Mohammed chief Masood Azhar and Mumbai attack mastermind Hafiz Saeed in the streets for torching them as part of a 'Holika-dahan' ritual.

The effigies were mounted on top of a huge pile of timber and broken twigs on a street in Kadam Kuan's Nawal Kishor Road, which was burnt to mark 'Holika dahan' or the eve of Holi.

The pile faced a shop on the street side, which sells colours, 'pichkaris' (water toy guns) and fancy masks, while an image of a jawan in combat fatigue and pointing a gun, had been put up on an electric pole in the corner of the road.

"People from the local area have put effigies to show solidarity with the spirit that terror activities originating from Pakistani soil would not be tolerated by India and its people.

Pictures of both the terrorists have been pasted on the faces of the effigies," a local shopkeeper, who did not wish to be named, said before the burning ritual.

While Saeed, head of Jamaat-ud-Dawa, who had orchestrated the November 2008 Mumbai terror attack in which 166 people were killed, is a designated terrorist, a fresh move has been made at the UN to designate JeM chief Azhar as a global terrorist.

The fresh proposal to designate Azhar under the 1267 Al Qaeda Sanctions Committee of the UN Security Council was moved by France, the UK and the US, in the wake of the Pulwama terror attack in Jammu and Kashmir in which 40 CRPF personnel were killed.

JeM had claimed responsibility for the Pulwama attack, which sparked global outrage.

India will show patience with China for "as long as it takes" but will not compromise its position on terrorism, government sources had said on Saturday, days after China blocked the fresh move at the UN to designate the JeM chief as a global terrorist.

A placard each had also been slung around the necks of the two effigies, bearing slogan of 'Pakistan Murdabad'.

At the bottom of the heap, a placard reading, "Pakistan this is just a trailer...", was kept. The message in Hindi was apparently a reference to the recent air strike by India on terror camps in Pakistan's Balakot region that had escalated tensions between the two countries.

Bonfires are put up on the eve of Holi as part of a festive ritual to symbolically burn 'Holika' or perform 'Holika-dahan' by setting afire wood, dried leaves, twigs and other inflammable articles.

In Patna, the piles, locally called 'agja' were put up on various prominent roads and inner streets to mark the festival. From Kankarbagh Colony to Station area, big bonfire were seen burning till late night in the streets.

State pollution authorities had appealed to people to not burn plastic objects or polythene bags as part of the bonfire.