Bus ride to Lahore with Vajpayee: When Kapil Dev was most gracious and Dev Anand went down memory lane 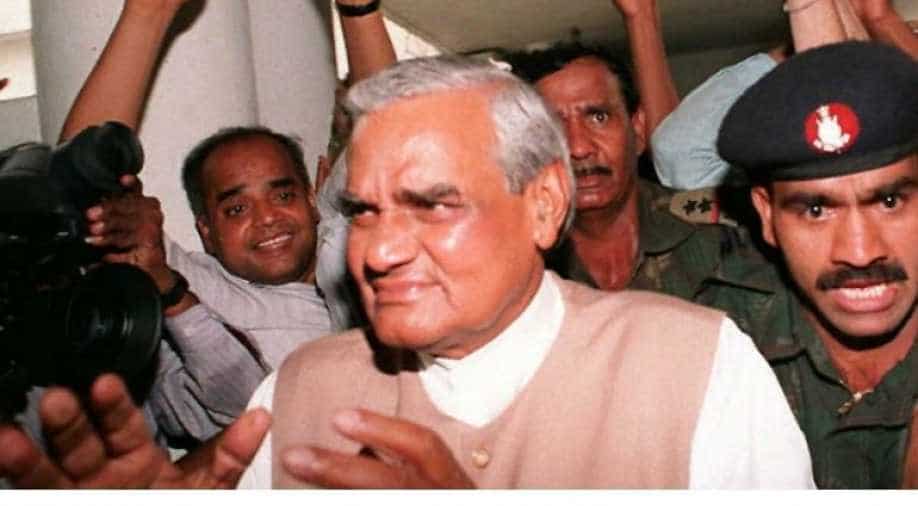 It took 40 minutes for the bus to go from the Indian side of Punjab to the Pakistani side and the seat next to Vajpayee on that momentous ride was a much-coveted one.

A host of luminaries from different fields were on the bus that took Atal Bihari Vajpayee on the historic journey from Amritsar to Lahore in 1999 but cricketer Kapil Dev was perhaps the most gracious, recalls the late prime minister's private secretary Shakti Sinha in a new book.

It took 40 minutes for the bus to go from the Indian side of Punjab to the Pakistani side and the seat next to Vajpayee on that momentous ride was a much-coveted one.

"The bus had two seats on either side of the aisle. Vajpayee was on the first seat on the left side of the bus, all by himself.

Throughout the short forty-minute journey, we provided an opportunity for each member of the delegation to sit with Vajpayee and chat for a while.

"Kapil Dev came across as the most gracious, quickly moving out when it was the turn of somebody else to sit with Vajpayee. With some of the others, I had to almost physically evict them; they shall not be named as they are not with us anymore," Sinha writes in "Vajpayee: The Years that Changed India" that hit the stands on Friday, the late leader's 96th birth anniversary.

Sinha also has a tale to tell about the late Dev Anand, who has legions of fans in Pakistan.

When the bus reached the other side of the border, the two prime ministers, Vajpayee and Nawaz Sharif, hugged each other.

Dev Anand, who stood next to them, started reminiscing about the time when he left Lahore for Mumbai.

"(he) would have carried on till we gently guided him away," Sinha says.

The prime minister's motorcade gets a free pass on the roads but a car carrying his hearing aid does not, he says, recounting the delay at the beginning of the journey in Delhi.

On the way to the airport in Delhi to board the flight to Amritsar, Vajpayee realised he had forgotten his hearing device at home.

"On our way to the airport, Vajpayee turned to me and nervously told me that he had left his hearing device at home. He had been checking his pockets and found them empty! Fortunately, we had cell phones by then, so I quickly rang back and asked for it to be sent pronto," Sinha writes.

"Fortunately for us, the PM's plane, operated by the air force, always has sufficient margin, a fact I knew by then. That knowledge gave us breathing space. We boarded but could not leave immediately since the car with the hearing aid was still on the way. But we were lucky that the traffic was light and the delay was a manageable twenty minutes," he adds.

The inaugural bus, 'Sada-e-sarhad', ran on February 19, 1999 between Delhi and Lahore, a distance of around 500 km, with three technical halts, taking a total of 14 hours.

Though Vajpayee was to travel all the way from Delhi, the plan was later modified and he boarded the bus at Amritsar airport.

Sinha, who is presently the director of Atal Bihari Vajpayee Institute of Policy Research and International Studies, MS University, Vadodara, also says Pakistan's then Prime Minister Sharif sent a word to his wife Begum Kulsoom Nawaz to drive from Islamabad to Lahore when he noticed that Vajpayee's foster daughter Namita Kaul Bhattacharya was part of the delegation.

Namita Kaul's husband Ranjan Bhattacharya and their daughter Niharika were also part of the tour.

"This indicated how much Vajpayee was personally invested in the visit, raising the tenor of the occasion by a few octaves," Sinha writes   The 'bus diplomacy', as it was called in later years, was hailed as the dawn of a new era in India-Pakistan relations but proved to be a short-lived thaw in the stormy relationship between the two countries.

Within months India and Pakistan were embroiled in the Kargil battle.

The over 300-page book, which consists of 10 chapters, is published by Penguin Random House India.