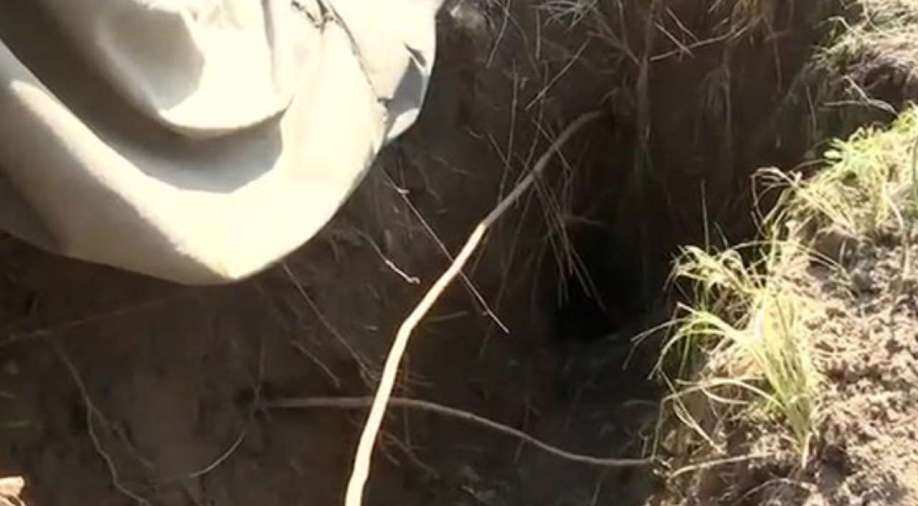 BSF troops detected the tunnel near the International Border in Samba area of the Jammu region. Photograph:(ANI)
Follow Us

The four Kashmir-bound Pakistani terrorists were killed in a gunfight after the truck, in which they were travelling, was stopped for checking at a toll plaza on the highway.

Soldiers of India’s Border Security Force (BSF) in a recent operation went almost 200 metres inside Pakistan's side to unearth a tunnel which was used by Jaish-e-Mohammed (JeM) terrorists killed recently in Jammu's Nagrota to infiltrate inside Indian Territory, a top government official said on Tuesday.

Immediately after the four Jaish terrorists were shot dead in a gunfight on November 19, the BSF, which oversee the International Border (IB) in the Jammu region, formed a crack team to explore the possible route taken by them.

The team followed its structure to unearth the opening of the tunnel on the Indian side and during the search operation, electronic and geographical data found on a mobile device recovered from the terrorists were also used, the officials said.

After detecting the mouth of the tunnel, the BSF team found itself 200 metres inside Pakistani territory, they said, adding it entered through the tunnel and recorded the visuals inside it on the Pakistani side as part of collecting evidence before they returned to the Indian side.

The operation was "swift and intelligence-based action", they said.

The four Kashmir-bound Pakistani terrorists were killed in a gunfight after the truck, in which they were travelling, was stopped for checking at a toll plaza on the highway.

The BSF, in an official statement, had said its personnel and those from the Jammu and Kashmir Police "detected a tunnel originating within Pakistan side of the International Border and exiting on the Indian side in the area of border post-Regal in Jammu's Samba district".

Based on leads obtained after the encounter, the BSF had said, it was learnt that these terrorists "were picked up by a truck from Jatwal village in Samba on the national highway".

The tunnel, it had said, was found by the "first light" on November 22 by the BSF crack team. The exit on the Indian side was in thick bushes carefully concealed and meticulously covered with soil and wild growth.

"The mouth of the tunnel was strengthened and reinforced by sandbags with markings of Karachi, Pakistan," the border force that guards the front had said.

It was a freshly dug tunnel and appears to be used for the first time. It appears that proper engineering effort had gone in digging the tunnel which shows the hand of the establishment, the force said.

"The detection of the tunnel resulted due to the well-coordinated operation among the BSF, J&K police and intelligence agencies," it had said.