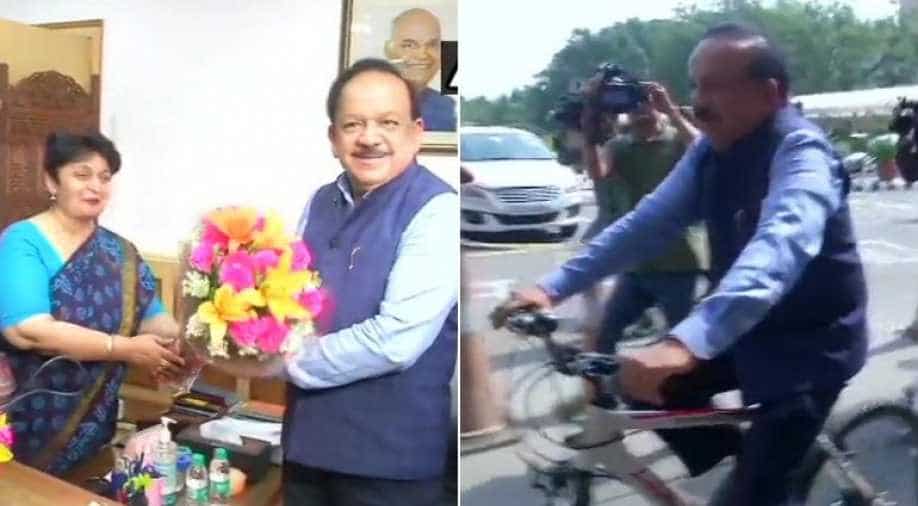 Dr Harsh Vardhan arrives at the Ministry of Health and Family Welfare on a bicycle, to take charge as the Union Minister for Health & Family Welfare. Photograph:( ANI )

Dr Harsh Vardhan is also minister of science and technology and minister of earth sciences.

BJP's Dr Harsh Vardhan who won handsomely from Chandni Chowk parliamentary constituency in Delhi arrived on a bicycle to take charge as the union minister for health & family welfare.

Dr Harsh Vardhan is also minister of science and technology and minister of earth sciences.

PM Modi's new cabinet was assigned portfolios on Friday with several new faces in the prime minister's team with Amit Shah who masterminded BJP's historic triumph at the general elections given the post of the home ministry.

BJP heavyweight Ravi Shankar Prasad who beat Congress candidate Shatrughan Sinha from Patna Sahib was given the telecom ministry including the law and IT ministries which he had held earlier.

Piyush Goyal was given the Railway ministry with Dharmendra Pradhan assigned the petroleum ministry which he held earlier along with the Steel ministry.

Smriti Irani who beat Congress president Rahul Gandhi at Amethi in the parliamentary elections was given the women and child development ministry including the textile ministry which she held earlier.