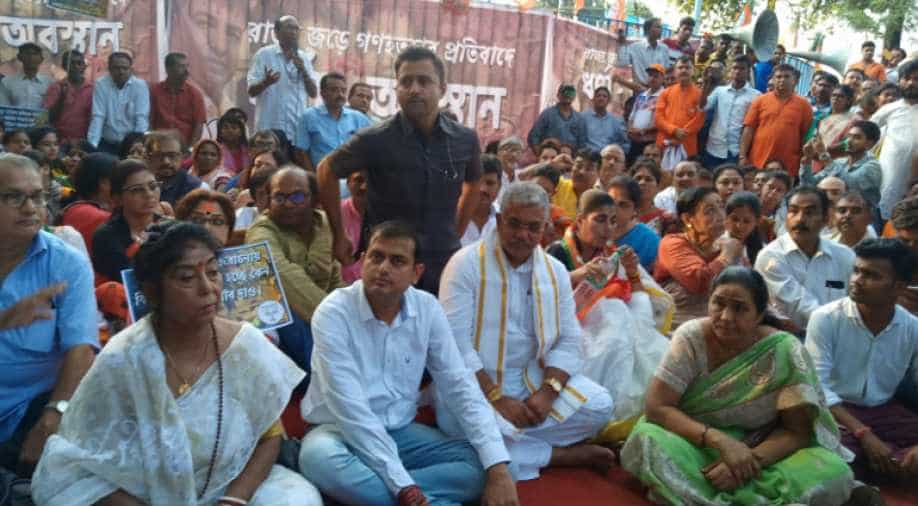 The West Bengal unit of BJP staged a dharna today at Gandhi statue in Kolkata to register their protest against the killings of BJP workers.

The party claimed that as many as eight members have been killed in the last 81 days with the most recent one being reported in Bengal's Nadia and Murshidabad district.

“Our happy days of the Durga Puja turned into days of grief with our partymen being killed. To protest against the killings, we have hit the streets today. We have come here to warn the government that we are not going to tolerate such violence and political killings. The day we reach the saturation point, citizens will take law in their hands and it will have serious repercussions. Hitting the streets is the need of the hour,” said Bengal BJP President Dilip Ghosh.

Besides Ghosh, other senior BJP leaders like – Swapan Dasgupta, Mukul Roy, Rahul Sinha and Bharati Ghosh were also present in the dharna.

“Such is the state of law and order in our state. We will launch our movement soon including a march to the Nabanna. As of now, the date is yet to be announced. But the Nabanna Abhiyaan will be held soon to give a clear message to the West Bengal government that BJP is not sitting idle and we will not tolerate TMC-sponsored atrocities,” added Ghosh.