Being grilled by CBI, Kolkata Police chief & ex-TMC MP ask for narco tests on each other: Source 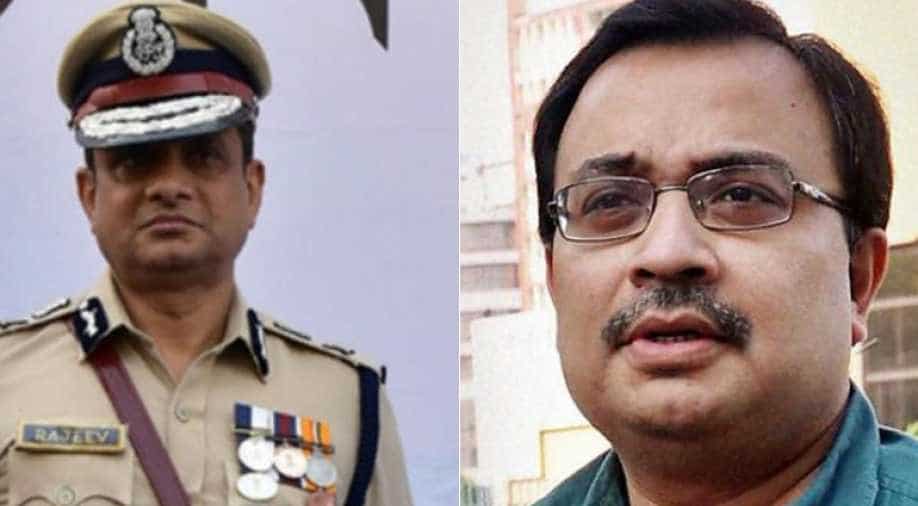 The CBI will question Kolkata Police Commissioner Rajeev Kumar for a fourth consecutive day Tuesday. It has said former TMC MP Kunal Ghosh's questioning is over for the time being.

After questioning for three consecutive days, the CBI Monday asked Kolkata Police Commissioner Rajeev Kumar to report to them again on Tuesday for further quizzing in the multi-crore Saradha chit fund case.

However, the questioning of former TMC MP Kunal Ghosh is over for the time being, the agency said.

Monday was the third consecutive day of grilling for Kumar and the second for Ghosh in the ponzi scam case worth around Rs 2,000 crore.

Kumar has been asked to report for questioning tomorrow again, an official told PTI, requesting anonymity.

Ghosh arrived at the CBI office here shortly after 10 am while Kumar reached an hour later, an official told PTI.

Kumar left the CBI premises shortly after 7 pm this evening.

Ghosh, who left the CBI premises 30 minutes after Kumar, told mediapersons, "I have been asked by CBI to attend this office related to the case. I have cooperated with the investigation and now I am going back to Kolkata".

Former TMC MP Kunal Ghosh after being questioned by CBI in Shillong: I was asked by CBI to come here&I cooperated in the probe. I've participated in the investigation in confrontation with Kolkata Police Commissioner Rajeev Kumar.I'm leaving for Kolkata tomorrow.#SaradhaChitFund pic.twitter.com/reAyG0F8eO

According to a well-placed source in the central probe agency, Kumar remained "cool" during Monday's grilling session.

Kumar claimed he had played no active role in the Special Investigating Team (SIT) formed to probe the Saradha chit fund scam as most of the probe was conducted "at the police station-level".

Kumar in course of questioning claimed that most of the probe was supervised by Arnab Ghosh, the then deputy commissioner of police of the detective department (DD) of the Bidhannagar City Police when the SIT started conducting the investigations into the scam, he said.

Kumar had led the SIT formed by West Bengal Chief Minister Mamata Banerjee to probe the Saradha scam before the case was handed over to the CBI by the Supreme Court.

"Just like yesterday both (Kunal) Ghosh and Rajeev Kumar were grilled together. There were some confrontations between them during face to face encounter but both remained cool", the CBI sleuth said.

At one point, Kumar asked to stop the recordings of the joint statement and conduct a narco test on Ghosh, the CBI sleuth added.

Ghosh, the CBI officer said, was ready for the test but demanded the same to be done on Kumar also.

The source claimed that Kumar said if he had got a bit more time, the investigation into the case could have been completed.

On Sunday, the probe agency questioned Kumar separately and also along with Ghosh. The marathon questioning of the two lasted over eight hours.

Ghosh was arrested in 2013 in the Saradha ponzi scam and has been out on bail since 2016.
The CBI is questioning the two in accordance with directions of the Supreme Court.

The Kolkata Police chief was quizzed for nearly nine hours on Saturday by three senior CBI officers about his alleged role in tampering of crucial evidence in the Saradha case, they said.

He was also examined in the Rose Valley case on Sunday.

Officials in Delhi said the CBI has not acceded to Kumar's demand to have his questioning session videographed.

It is done only in cases of custodial interrogations, they said.
Ghosh earlier implicated BJP leader Mukul Roy, who was once the right hand man of Banerjee, and 12 others in the Saradha scam.

The Supreme Court directed Kumar on Tuesday to appear before the CBI and "faithfully" cooperate in the investigation of cases arising out of the Saradha chit fund scam.

The court chose Shillong as a neutral meeting place "to avoid all unnecessary controversy" and made it clear that Kumar would not be arrested.

The CBI moved the Supreme Court after its officials were thwarted by the Kolkata Police when they had gone to Kumar's official residence in Kolkata to question him on February 3.

Banerjee had rushed to the spot and staged a three-day 'Save the Constitution' sit-in against the
CBI move, accusing Prime Minister Narendra Modi and BJP national president Amit Shah of plotting a "coup".