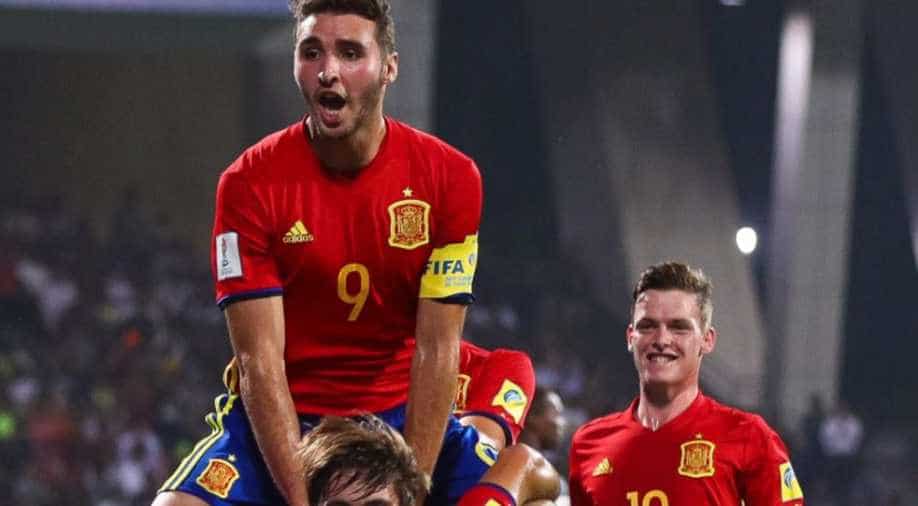 European champions Spain staved off a battling Mali to emerge 3-1 winners in a rip-roaring, action-packed semi-final contest to enter the summit clash of the FIFA U-17 World Cup at the D Y Patil Stadium, here today.

Spain scored twice in the first half, both the goals coming from their ebullient striker Abel Ruiz, and added one more through a headed goal by Ferran Torres to take a commanding 3-0 lead before Mali found the mark for the first and only time through their own top goal getter Lassana N'Diaye in the 74th minute.

By virtue of this win, Spain has entered the final of the FIFA U-17 World Cup for the fourth time after their first apperance in the title clash 2007.

Mali also had an attempt that appeared like a legitimate goal which was controversially not signalled in by the assistant referee, when they were trailing 0-2 before Spain scored their third goal to virtually shut off the contest although Mali fought hard till the end.

The victory by Spain after staving off a late fight-back by the African age group champions has, thus, piloted them into a summit clash against England at Kolkata on October 28.

Spain were the dominant force in the entire first half

England got the better of South American champions Brazil 3-1 in the first semi-final.

Spain were the dominant force in the entire first half as they took a handy two-goal lead with their sharp-shooter Abel Ruiz finding the net on both occasions, the first one from the penalty spot in the 19th minute and the second with an on- the-run effort in the 45th minute.

Ruiz and Cesar Gelabert combined beautifully with promptings from the mid-field to tear apart the leaky Mali defense to shreds.

Spain clearly had the better share of the exchanges too and could have been 4-0 up but for an early brilliant save by Mali custodian Youssouf Koita and then a missed chance by Ruiz who took his tally to six goals in the tournament.

After Koita blocked a stiff left-footed volley by Sergio Gomez in the second minute, Gelabert side-stepped a couple of defenders only to shoot wide with his left foot.

Mali had their best chance of the first half in the eighth minute when their top goal getter, with five goals before today's match, Lassana Ndiaye, got a faint touch to the ball after being chased in his forward thrust by Spain's Hugo Guillamon, but the ball kissed the side netting.

Then came the opening goal of the match when Gelabert was brought down, as he moved into the box, by Mali defender Abdoulaye Diaby. Ruiz sent Koita the wrong way from the spot- kick to provide the European U-17 champions a 1-0 lead.

Mali fought back after falling into arrears as they made repeated raids on the rival area but some good defending by Spain and some wayward shot-making by the African champions denied them the equaliser.

Spain came close to scoring for the second time as a centre from the left wing by Mohammed Moukhliss was allowed to reach Ruiz who, however, shot wide on-the-run from close range.

Mali tried some long range shots and from one of those, Spain goalie Alvaro Fernandez brought off a diving save to deny Cheick Omar Douchare.

Just when it seemed that Spain would go in with a 1-0 advantage at half time came a counter attack off which Gelabert put a through ball for Ruiz to run forward and find the right corner of the net with a neat placement past Koita.

Mali then were denied a goal in controversial fashion.

A 40-yard pile-driver by Doucoure flew past Spanish goalie Fernandez and hit the underside of the cross bar and bounced on the ground before coming back into play which was headed out. But the ball seemed to have bounced inside the goal before rebounding into play, with the assistant referee not signalling it in.

Even as play continued the Mali bench rose as a whole to protest and after continuous shouting caught the attention of referee Ryuji Sato of Japan who, after remonstrating with the Mali bench, showed the yellow card to one of the support staff members for repeated back-chatting.

To rub more salt to the wounded of Mali came the third goal from Spain, once again following an attack from the wing as a high cross from the left by Gomez was headed in by an unmarked Ferran Torres.

After a short break for drinks, N'Diaye caught the Spain defense napping and moved well into the box after hoodwinking a couple of defenders before slotting in with an angular effort to make it 3-1 with 16 minutes left on the clock.

Putting all their effort into attack Mali made another stiff effort but substitute Mamadou Traore's essay sailed over the bar.
With time ticking away Spain made an all-out effort and denied Mali any further goals to sail into the final against fellow-European rivals England. PTI

'He is now training by himself': Christian Eriksen starts training at youth club in Denmark