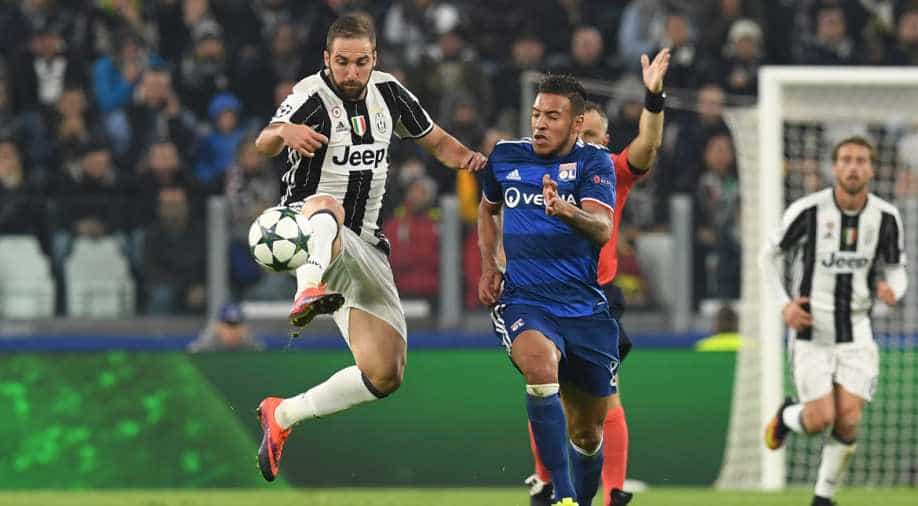 Gonzalo Higuain converted an early penalty for Juventus and then missed a sitter before Olympique Lyonnais hit back late in the game to grab a 1-1 draw in their Champions League match on Wednesday.

Corentin Tolisso's 85th-minute header, the first goal that the Italian champions have conceded in four games in Group H, kept alive the French side's slim hopes of reaching the last 16 and kept Juve waiting for at least one more game to book their spot.

Juventus are second with eight points, two behind leaders Sevilla, and should still progress, while Lyon have four.

Juventus coach Massimiliano Allegri was angry with his team for trying to grab a late winner instead of settling for the draw.

Juve were gifted an early lead when Higuain burst down the left and found Stefano Sturaro who was clumsily pushed over by Mouctar Diakhaby.

The Argentine stepped up and sent Anthony Lopes the wrong way from the spot.

However, Higuain turned villain shortly before halftime when he scooped the ball over the crossbar with the goal at his mercy after Mario Mandzukic had won possession off a defender and set him up with a glorious opportunity.

In between, Claudio Marchisio sent a low drive agonisingly wide from just outside the penalty area.

Juventus, who won 1-0 in Lyon two weeks ago, appeared to sit back after halftime and the visitors enjoyed plenty of possession although they struggled to turn it into genuine chances.

Already missing Giorgio Chiellini from their so-called 'BBC' defence, Juventus also saw Leonardo Bonucci limp off in the 67th minute when he had to be replaced by Mehdi Benatia.

The revamped defence were caught out with five minutes left when Rachid Ghezzal delivered a superb free kick into the Juve area which was attacked by three players, with Tolisso getting there first to head past Gianluigi Buffon.

Juventus threw themselves forward in search of a late winner and Lyon threatened to snatch the points when Alexandre Lacazette ran on to a through ball but Buffon did well to narrow the angle.