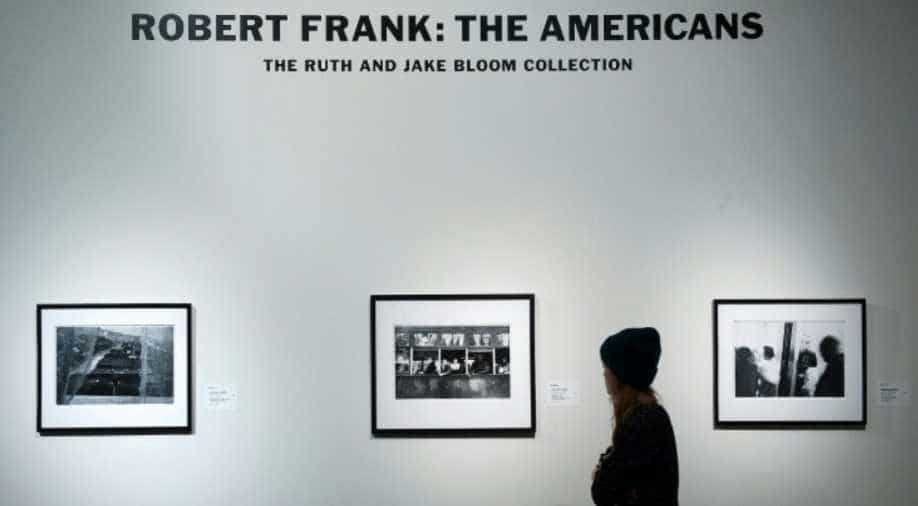 The Swiss-born photographer rose to fame with the publication of his landmark book 'The Americans,' an unflinching look at US society that proved hugely influential.

Robert Frank, a trailblazing documentary photographer whose raw, piercing aesthetic placed him among the 20th century's greats, has died, according to his gallery. He was 94 years old.

The Swiss-born photographer rose to fame with the publication of his landmark book 'The Americans,' an unflinching look at US society that proved hugely influential.

A spokesperson from the Manhattan gallery Pace/MacGill told AFP that Frank died overnight of natural causes in Inverness, Nova Scotia.

His seminal book -- published in France in 1958 and in America one year later -- emerged out of a series of road trips across the United States with his family in the mid-1950s, a journey akin to those made by his friend and writer Jack Kerouac and others from the 'Beat Generation.'

Eschewing classic photographic techniques, Frank pioneered the snapshot, capturing telling vignettes in black and white as they presented themselves, exploring the realities of everyday people for whom the American Dream rang hollow.

He produced 28,000 images that were boiled down to 83 for the book that rewrote the rules of photojournalism.

As Kerouac wrote in the preface of the US edition, Frank "sucked a sad poem right out of America onto film."

At lunch counters and drive-in movie theatres, on Route 66 and at champagne get-togethers, his gritty, subjective style laid bare a wide range of emotions and relationships, notably racial, that were rarely found in the popular illustrated magazines of the time.

"Through the unvarnished, phenomenally capable eye of an immigrant, he saw us for what we are."

Born on November 9, 1924 in Zurich, Switzerland, Frank grew up in a family of German Jewish industrialists and became passionate about photography at the age of 12. He trained as a photo assistant in Zurich and Basel from 1940 to 1942.

After World War II, he moved to the United States, pursuing fashion and reporting photography for magazines that included Fortune, Life, Look and Harper's Bazaar.

He grew "tired of romanticism," and, armed with his gut and a pair of Leicas, Frank began recording scenes of daily life.

He developed a friendship with fellow photographer Walker Evans, whose Depression-era photos intrigued him.

But Frank pursued themes including alienation, mass culture and veiled violence with a spontaneity that stood in sharp contrast to Evans' carefully crafted work.

A Guggenheim fellowship gave him the opportunity to visit 48 US states, and he brought back frames of a weary, hard and divided country.

He also found beauty in the overlooked, photographing cars, diners and jukeboxes that went down in the iconography of American life.

And yet, "he never crossed over into celebrity," said photographer Nan Goldin. "He's famous because he made a mark. He collected the world."

As his reputation grew, Frank abruptly shifted into underground filmmaking, making several films, including "Pull My Daisy" (1959), based on Beat icon Neal Cassady, and a documentary about The Rolling Stones called 'Cocksucker Blues' (1972).

After learning of his death, the legendary English rockers he chronicled dubbed him a "visionary," saying in a statement that Frank "was an incredible artist whose unique style broke the mold."

Frank returned to photography after tragedy struck his family with the death of his daughter Andrea in a 1974 plane crash.

He divorced his first wife and had two children. His son Pablo, who suffered from schizophrenia, killed himself in 1994.

In the meantime, Frank's work had "shifted from being about what I saw to what I felt," he told The Guardian. "I didn't believe in the beauty of a photograph anymore."

He began to create montages, write on his pictures and scratch the negatives.

Remarking on one of Frank's staged silver gelatin prints from 1978 -- called "Sick of Goodby's" for a phrase in it that is cursorily daubed on a mirror -- the late rocker Lou Reed said "the photos speak of acceptance of things as they are."

"Robert Frank is a great democrat," Reed said. "We're all in these photos. Paint dripping from a mirror-like blood."