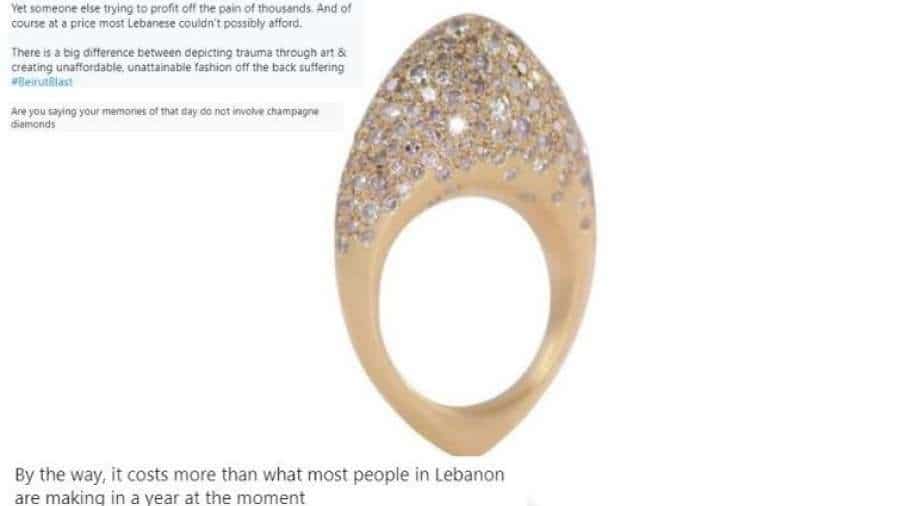 According to Ghazal, she has designed a ring representing the resilience and strength of a city that will not be brought down, inspired by the cloud of dust that rose from the blast.

Six months after the deadly chemical explosion that brought Beirut to its knees, designer Nada Ghazal, a jewellery designer, and survivor of the blast is channelling her memory in form of art.

According to Ghazal, she has designed a ring representing the resilience and strength of a city that will not be brought down, inspired by the cloud of dust that rose from the blast.

In her interview with Forbes, she opened up behind the idea of bringing it all together. “The challenges we go through, versus the big smiles we always have, there’s something unexplainable there. There’s some kind of magic in this country," said Nada Ghazal, of her fellow Lebanese.

The chemical explosion in Beirut last August, destroyed a large part of the city center, leaving 207 people dead, and over 300,000 homeless. It caused an estimated $15 billion in damage to property across the city, destroyed Ghazal's workshop, existing store, and the flagship into which she was about to move, and caused significant damage to her home.

The 'Blast ring' is an 18kt yellow gold ring that rises off the hand to a gentle peak, set with champagne diamonds reminiscent of the dust clouds she saw after the explosion, according to Ghazal's description to Forbes. Underneath, the ring dips down below the finger, symbolizing the challenges that threaten to drag us down, while the top reaches tall up towards the sky, diamonds glinting in the sun. The ring features her trademark volume paired with the soft gleam of a matte gold finish, a strikingly elegant statement piece with meaning.

“We, as Lebanese, have had so many challenges," she said in her interview. "But we are not only out-of-the-box thinkers, we have removed the box altogether when it comes to creative ways to survive and also thrive.” And as Beirut emerges from the ashes once again, Ghazal has created a timely reminder that with resilience, creativity, and strength, we can all rise up.

"I created Fuse Rock a few months back while Lebanon was, as it still is, going through one of its toughest times. I wanted to feel strong, to be defiant, to stand up despite it all. I needed to garner my strength and visualize it in this sketch which then became our Fuse Rock Ring," she explained the design in a Facebook post.

I created Fuse Rock a few months back while Lebanon was, as it still is, going through one of its toughest times. I...

The solo piece was "visualisation of the cloud of smoke I saw in the midst of the explosion which destroyed our home, our offices and took away our friends".

However, the design and the inspiration behind it didn't sit well with many as people called the design 'insensitive and a way to cash on the tragedy.

By the way, it costs more than what most people in Lebanon are making in a year at the moment pic.twitter.com/F7TsSgmdu6

Yet someone else trying to profit off the pain of thousands. And of course at a price most Lebanese couldn't possibly afford.

There is a big difference between depicting trauma through art & creating unaffordable, unattainable fashion off the back suffering #BeirutBlast https://t.co/wyxj8ZHtZk

I presume all revenue will be contributed to the judicial process and the rights of the victims! If not then it’s disgusting.

It's interesting to note that Ghazal isn't the only Lebanese artist inspired by the aftermath of the blast. Many artists who lost their livelihoods and businesses to the blast are coming out with interesting ways to channel the pain.

According to Marie Claire report, many jewellery designers are recreating the lost beauty of the city in their pieces, while tapestry artists are channelling the process of recovery and the devastation caused by the blast, in artful showcases.