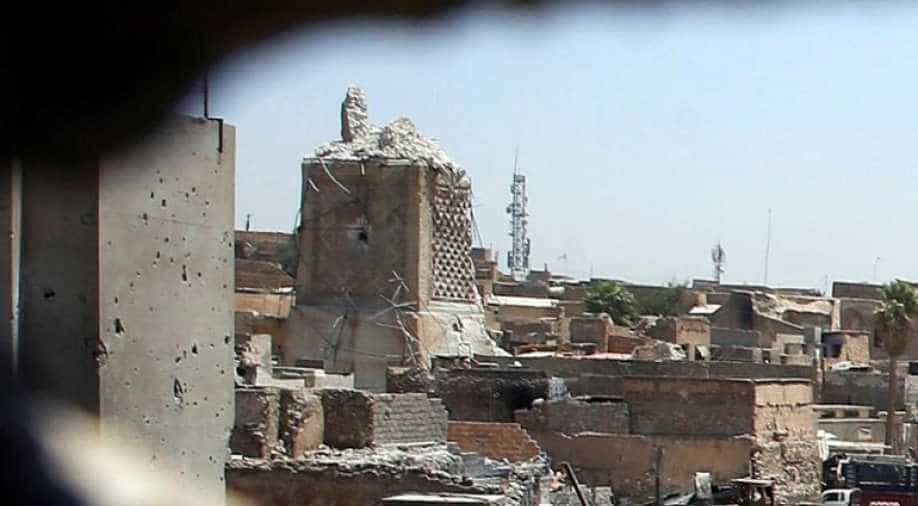 The al-Hadba minaret at Grand al-Nuri Mosque was blown up by the Islamic State group last week. Photograph:( Reuters )

The complex was severely damaged by conflict in 2017, and the rebuilding of the mosque is part of the organisation's project for the rehabilitation of the ancient city

The complex was severely damaged by conflict in 2017, and the rebuilding of the mosque is part of the organisation's project for the rehabilitation of the ancient city.

The mosque, built in the 12th century and famous for its leaning minaret, suffered badly in fighting between the Islamic State group and US and Iraqi forces, known as the Battle for Mosul, with IS accused of blowing up the site before it was captured by government forces.

Selected from among 123 entries, the winning design is called "Courtyards Dialogue".

The reconstruction "will be a landmark in the process of advancing the war-torn city's reconciliation and social cohesion,", said UNESCO Director-General Audrey Azoulay.

The reconstruction work, to start in the late autumn, aims to rebuild Al-Nouri's historic prayer hall and integrate the complex, the largest public space in the Old City of Mosul, into its urban surrounding through open public spaces.

UNESCO launched the competition in November 2020 in coordination with the Iraqi ministry of culture, the Iraqi Sunni Endowment and with support from the United Arab Emirates.

It is part of UNESCO's "Revive the Spirit of Mosul" initiative for the rehabilitation of the city and its cultural life, and the strengthening of its educational system.