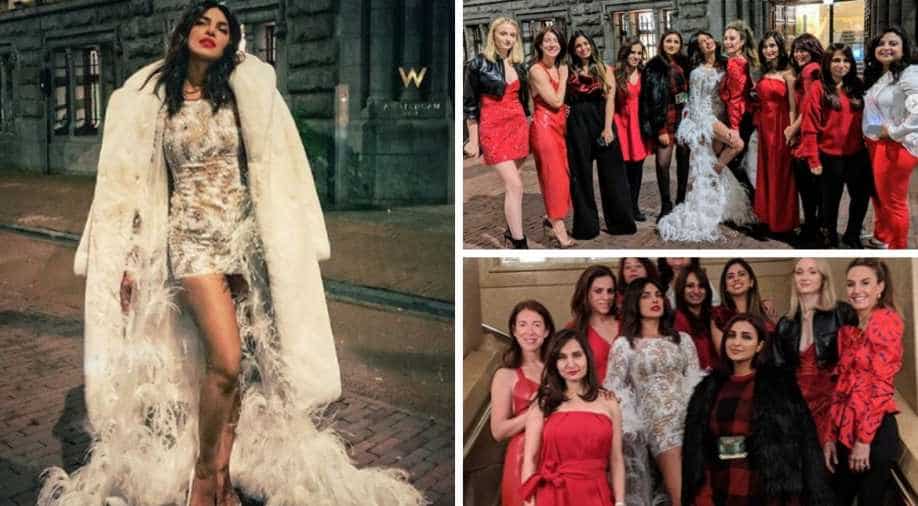 Priyanka Chopra and her girl gang have taken over Amsterdam as they bring in her bachelorette trip in style. We told you yesterday about how Priyanka sizzled in different attires, shining like a star as she continued to party with her close friends including future sister-in-law, Sophie Turner.

Joining her gang are two more celebs from India, cousin sister Parineeti Chopra and Mukesh Ambani’s daughter Isha Ambani. Others on the bachelorette with her include work associates Natasha Pal, Chanchal D'Souza and Dana Supnick-Guidoni and besties Tamanna Dutt and Srishti Bahl Arya.

In photos posted by the bride-to-be herself, Priyanka looked like a sight to behold in a white short dress with faux fur train and minimal makeup. While the bride-to-be chose a white ensemble, her bride tribe was decked up in red and black.

She posted a full-length photo of her dress and captioned it: "Featherweight champion of the world," adding the hashtags 'Bachelorette' and 'Faux Not Fur'.

It all started with Priyanka throwing a lavish bridal shower for close to 100 guests at Tiffany & Co. in New York. This is the designer she wore on the day.

Love, laughter and a room full of amazing ladies...and some special gentlemen (what a special surprise)! Thank you so much @mubinarattonsey and @anjula_acharia for throwing me such a memorable bridal shower that broke all the rules! My amazing friends and family who made me feel so special and loved, thank you. And to top it off @tiffanyandco 😍 Perfect! Here’s sharing it with you...

The bride tribe then went for lunch on a canal cruise in Amsterdam. On the first day, she chose a cable-knit sweater with decorative feathers. She put on an oversized pullover, matching thigh-high socks and snakeskin boots.

Priyanka will reportedly take two-weeks off for work post-wedding. Meanwhile, this is the trailer of her next Hollywood project 'Isn't It Romantic'.