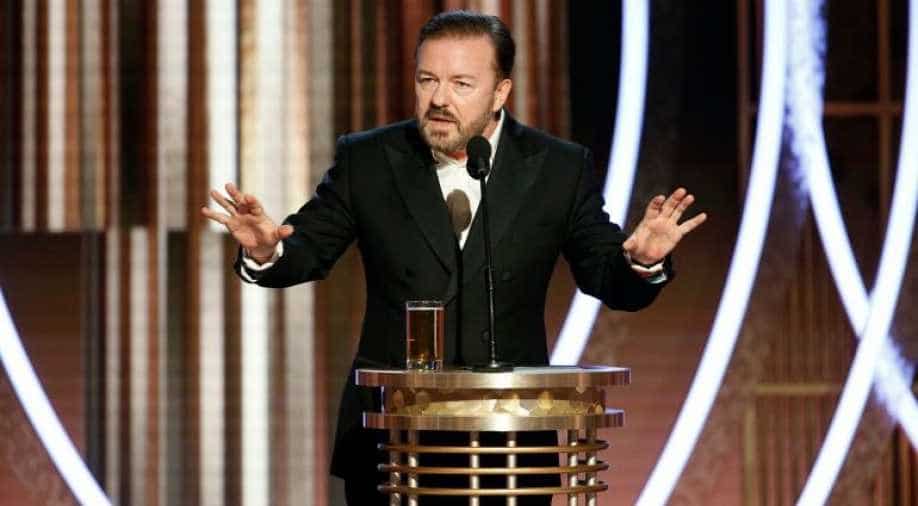 Ricky Gervais returned to host the Golden Globe awards on Sunday, cracking scathing jokes about Hollywood's elite that got both laughs and disapproving looks from the A-list audience. Photograph:( Reuters )

Nothing was off the table for British comedian and actor Ricky Gervais as he took the role of a host at the Golden Globe awards on Sunday. This was his fifth time hosting the awards and he cracked scathing jokes about Hollywood's elite that got both laughs and disapproving looks from the A-list audience.

Gervais, known for his no-holds-barred style of comedy, joked about Hollywood's lack of diversity, film producer Harvey Weinstein, who has been accused by more than 80 women of sexual misconduct, and the suicide of financier and sex offender Jeffrey Epstein.

"Let's have a laugh at your expense," Gervais said at the start of his opening monologue, in which he vowed that the ceremony would be his last time hosting. "Remember we're all gonna die soon. And there's no sequel."

Gervais last hosted the Globes four years ago, before the #MeToo and #OscarsSoWhite movements shined a spotlight on the underrepresentation of women and minorities in Hollywood.

He said the Hollywood Foreign Press Association, which hands out the Golden Globes, had planned to have a segment honoring celebrities who died in 2019, "but when I saw the list of people who died, it wasn't diverse enough."

Gervais also called out Hollywood actors as hypocrites for giving impassioned political speeches at awards shows while working in movies or television series produced by major tech and media corporations.

"You say you're woke, but the companies you work for - I mean, unbelievable - Apple, Amazon, Disney. If ISIS started a streaming service, you'd call your agent, wouldn't ya?," he asked.

"So if you do win an award tonight, don't use it as a platform to make a political speech. You are in no position to lecture the public about anything. You know nothing about the real world. Most of you spent less time in school than Greta Thunberg.

. @rickygervais just made a Jeffrey Epstein didn't kill himself joke at the #GoldenGlobes and the audience groaned.

He instantly responds: "Shut up, I know he's your friend, but I don't care."

Their faces in the audience are EVERYTHING. pic.twitter.com/p1FbYznSVE

"So if you win, right? Come up, accept your little award, thank your agent and your God" and leave the stage, he concluded, using an expletive.

Gervais' jokes prompted nervous laughter from the audience at the Beverly Hilton hotel. Actor Tom Hanks, who received a lifetime achievement award at the ceremony, was caught giving a disapproving look during Gervais' monologue that went viral on Twitter.

When Ricky Gervais is going around the room obliterating everyone and then he looks at you: pic.twitter.com/KdwFDNAtC1

Safer subjects, such as the US college admissions scandal and long movies, also provided Gervais with irresistible fodder.

Here's all the awkward Hollywood faces during Ricky Gervais' opening monologue at the #GoldenGlobes. You're welcome. pic.twitter.com/H4AwpRV2ZA

Gervais said he "came here in a limo tonight and the license plate was made by Felicity Huffman," referring to the 'Desperate Housewives' actress, who served nearly all of a 14-day prison sentence last year for her role in the admissions scandal.

The comedian also said Leonardo DiCaprio, the star of Quentin Tarantino's two-hour-and-40-minute-long film 'Once Upon a Time in Hollywood,' "attended the premier and by the end his date was too old for him."