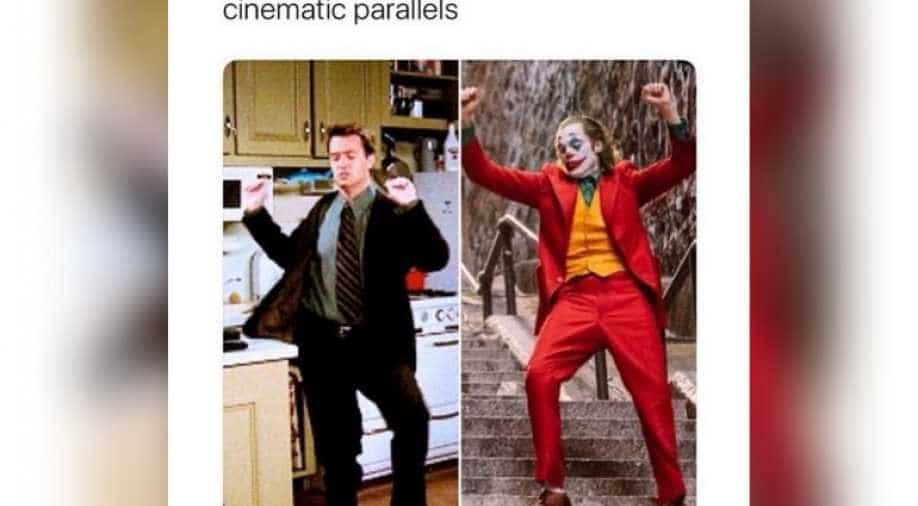 In the photo, Chandler is dancing with his arms up in the air, and it looks almost identical to the iconic scene from 'Joker'.

Matthew Perry, who portrayed the character of Chandler in sit-com 'Friends' on Sunday posted a hilarious photo on Twitter giving away an unexpected similarity between Chandler and Joaquin Phoenix's character.

In the photo, Chandler is dancing with his arms up in the air, and it looks almost identical to the iconic scene from 'Joker' wherein Joaquin's character dances down a flight of stairs when he is on his way to his dream show. The text in the image read ''Cinematic parallels".

Perry captioned the post as "You're welcome". In another tweet, Perry said he does not know who made up this image but went on to laud the person for his creativity. "Sorry I don't know who made the image, but bravo," Perry tweeted.

Sorry I don’t know who made the image, but bravo.

'Joker' has claimed a number of milestones this year and it continues to garner praise all over the world. The flick recently claimed the Golden Frog Award for its cinematography at the EnergaCamerimage Festival in Torun, Poland, on Saturday.

Additionally, the feature film also won the Audience Award at the event, according to the news agency. Then and Now: Your Favourite Stars From 'Friends' After 25 Years Of The Hit Show

'Joker' had hit the screens on October 2 in India and before its release, it had managed to win the 'Golden Lion' award at the Venice Film Festival.