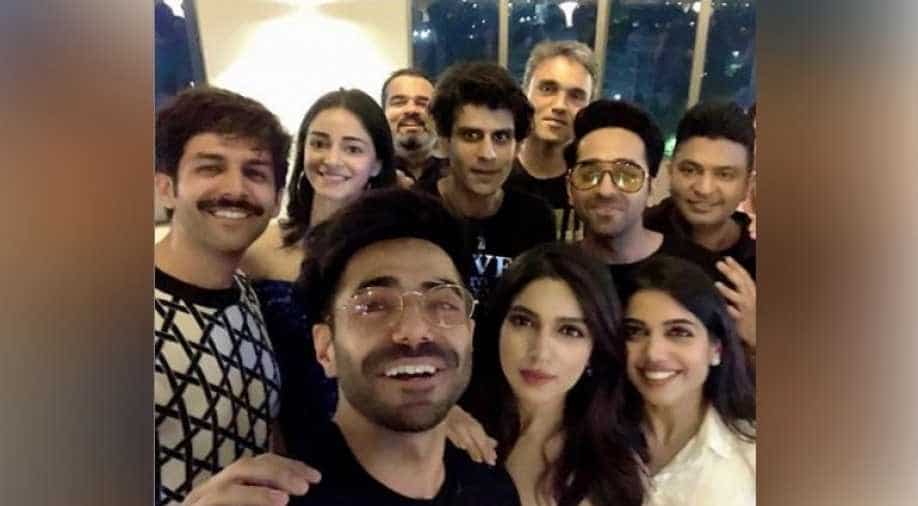 The `Vicky Donor` actor wanted to surprise the birthday girl and he played a spy to find out where the team was celebrating her birthday.

Birthday celebrations were a mix of `Bala` and `Pati, Patni Aur Woh` for actor Bhumi Pednekar who turned 30 on Thursday. She had a memorable day as Ayushmann Khurrana stopped by to add to the celebrations.

The `Vicky Donor` actor wanted to surprise the birthday girl and he played a spy to find out where the team was celebrating her birthday.

"While Ayushmann is busy with 'Gulabo Sitabo' and wanted to surprise Bhumi and figured out when the cast and crew of her film was celebrating her birthday," an insider revealed.

Bhumi already shared pictures of how her celebrations kick-started with family and work friends, on Friday she gave a glimpse of her birthday party in Lucknow with her co-stars from both `Bala` and `Pati, Patni Aur Woh`.

It was a beautiful groupfie clicked by Aparshakti Khurrana that Bhumi shared and thanked all those who made her day special.

"Thank you for the making my day this special...for all the msgs..flowers..love and blessing. And to the ones in this picture and my pati patni aur woh fam, you really made Lucknow memorable."

Currently, she along with Kartik Aaryan and Ananya Panday is shooting in Lucknow for their upcoming. Prior to which, she was shooting with Ayushmann Khurrana for `Bala` in the capital city.In another post shared after a few moments later, Bhumi is seen standing between `Bala` and `Chintu Ji`.

Bhumi has had a journey of about four years in the celluloid world with her first film `Dum Laga Ke Haisha` which released in 2015.

A slew of celebrities including Taapsee Pannu, Vaani Kapoor, Ayushamann showered love on the actor as she turned a year older a day ago.She is currently awaiting the release of her latest film `Saand Ki Aankh` which is expected to hit the screens around Diwali this year.