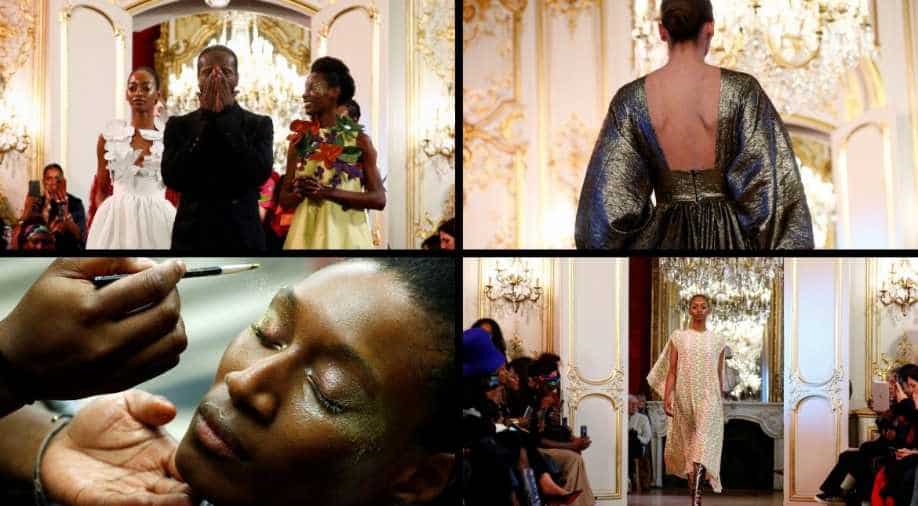 Designer Imane Ayissi appears with models at the end of his Haute Couture collection Photograph:( Reuters )

"It's an honour", Ayissi, 51, told Reuters backstage before the show, referring to the decision, after many years of knocking him back, to finally admit him to the select club of haute couture fashion houses showing in Paris.

"It's an honour", Ayissi, 51, told Reuters backstage before the show, referring to the decision, after many years of knocking him back, to finally admit him to the select club of haute couture fashion houses showing in Paris.

"I have been fighting for 28 years, dedicated all my life to the work. The French Federation of Haute Couture and Fashion opened its door to me after it rejected my application many times, because it was not the right time or my work did not match with expectations. But this time, it worked", he said.

Ayissi started young, making outfits for his mother who was a winner of the Miss Cameroon beauty pageant in the 1960s.

Drifting into modelling, he moved to Paris thirty years ago, and walked the runway for high-end stylists including Yves Saint-Laurent, Pierre Cardin, Givenchy and Lanvin.

He later decided to devote himself fully to working as a designer, defining a style he described as minimal, sleek and elegant "with a certain mastery of fabric and form".

For his show late on Thursday, which was chosen to close this year's edition of the Paris Haute Couture fashion week, models walked down the catwalk in a Paris hotel to a soundtrack of African music.

Models showed off gowns in the style of contemporary Western fashion but with a twist: they were made of organic Faso Dan Fani, a cotton cloth from Burkina Faso woven in strips.

Another outfit, a silk dress, was adorned with stained tree bark cut out into the shape of flowers.

"I do what I can - to show real African fabrics, tell stories," Ayissi said of his collection.