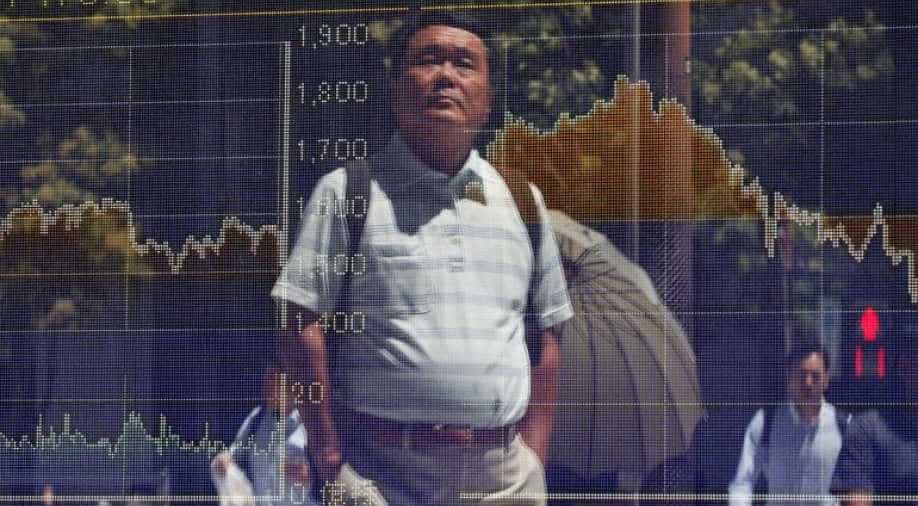 MSCI's broadest index of Asia-Pacific shares outside Japan edged 0.1% lower, though it was up 0.6% for the week and on track to break a four-week losing streak.

Asian shares struggled to make any headway on Friday as weak US  manufacturing activity and uncertainty over how much further the Federal Reserve would cut rates added to the general air of caution in markets buffeted by global growth fears.

With political tumult in Hong Kong, Italy and Britain adding to the tense backdrop, investors were keenly waiting on a speech by Fed Chairman Jerome Powell later in the day at a gathering of central bankers in Jackson Hole.

MSCI's broadest index of Asia-Pacific shares outside Japan edged 0.1% lower, though it was up 0.6% for the week and on track to break a four-week losing streak.

"It's going to be another wait-and-see day for traders ahead of Powell's Jackson Hole speech. Investors are hoping for some soothing words from him," said Hirokazu Kabeya, chief global strategist at Daiwa Securities.

Wall Street stocks were mixed on Thursday, with the S&P 500 closing little changed, while the Dow was up 0.2% and the Nasdaq falling 0.4%.

In the US bond market, the closely watched two-year, 10-year Treasury yield curve briefly moved back into inversion overnight, a shift that also occurred last week and sent financial markets into a tailspin amid worries of a sharp global downturn. An inversion in the US yield curve has presaged several past US recessions, raising fears the decade-long expansion in the world's biggest economy might be nearing its end.

Overnight, there were more signs of easing momentum as a survey showed US manufacturing activity contracted for the first time since September 2009, though better jobless claims data indicated a resilient labour market.

All of that has made Powell's speech in Jackson Hole pivotal for markets as they look for any clues on future policy easing, after the Fed last month cut rates for the first time since the financial crisis. Any indications of hawkishness in the Fed chief's comments might hurt riskier assets, though the dollar stands to benefit.

The greenback slipped on Thursday, but moved within narrow ranges.

In early Asian trading, the dollar was up 0.1% against a basket of major currencies to 98.249.

The euro also was little changed against US currency at $1.1078. A survey showing a surprise uptick in eurozone business growth for August was offset somewhat by trade war fears knocking future expectations to their weakest in over six years.

The pound jumped to a three-week high of $1.2273 overnight after traders interpreted comments from German Chancellor Angela Merkel to mean that a solution to the Irish border problem could be found before Britain leaves the European Union on October 31.

Merkel on Wednesday challenged Britain to come up with alternatives to the Irish border backstop within 30 days, but French President Emmanuel Macron cautioned there would be no renegotiation of the Brexit deal. Sterling last quoted at $1.2244, almost flat on the day.

China's yuan, which slid to fresh 11-1/2-year lows on Thursday despite support from major state-owned banks in both the spot and forwards markets, maintained its weak tone against the dollar amid worries about the deepening Sino-US trade war.

In early trade, the offshore yuan stood at 7.0924 to the dollar, little changed on the day.

Oil prices weakened overnight, with both Brent crude and US West Texas Intermediate down 0.6% each, on worries about the global economy.

Gold prices dipped on Thursday but held near the pivotal level of $1,500 per ounce, underpinned by continued demand for the precious metal amid uncertainties around monetary policy, trade and geopolitical tensions.