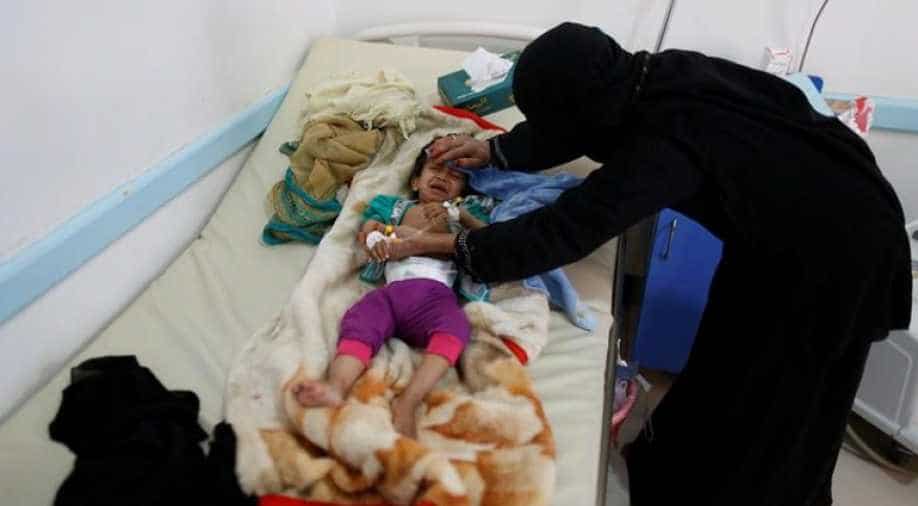 A woman helps her son as he lies on a bed at a cholera treatment centre in Sanaa, Yemen June 6, 2017. Photograph:( Reuters )

Yemen has been devastated by a 27-month war between a Saudi-led coalition, making it a breeding ground for the disease

The death toll from a major cholera outbreak in Yemen has risen to 1,500, Nevio Zagaria, the World Health Organization's (WHO) representative in Yemen, said on Saturday, and appealed for more help to put an end to the epidemic.

Yemen has been devastated by a 27-month war between a Saudi-led coalition and the armed Iran-aligned Houthi group, making it a breeding ground for the disease, which spreads by faeces getting into food or water and thrives in places with poor sanitation.

Speaking at a joint news conference with representatives of the United Nations Children Fund (UNICEF) and the World Bank, Zagaria said that had been some 246,000 suspected cases in the period to June 30.

The WHO said this week that the outbreak had reached the halfway mark at 218,798 cases as a massive emergency response has begun to curb its spread two months into the epidemic.

Although most of Yemen's health infrastructure has broken down and health workers have not been paid for more than six months, the WHO is paying "incentives" to doctors, nurses, cleaners and paramedics to staff an emergency cholera network.

With funding help from the World Bank, the WHO is setting up treatment centres with 50-60 beds each, overseen by shifts of about 14 staff working around the clock. The aim is to reach 5,000 beds in total.