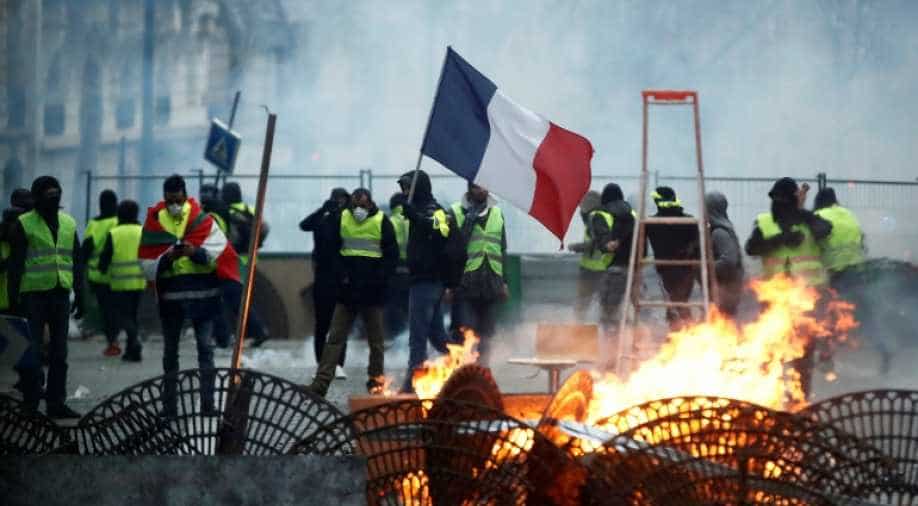 Prosecutors have launched an investigation into a group of protesters who shouted anti-Semitic insults at philosopher and writer Alain Finkielkraut during demonstrations in the capital on Saturday.

French officials on Sunday strongly condemned anti-Semitic abuse and anti-police attacks by some "yellow vest" demonstrators as up to 2,000 of them gathered in central Paris to embark on the third month of the anti-government protests.

Prosecutors have launched an investigation into a group of protesters who shouted anti-Semitic insults at philosopher and writer Alain Finkielkraut during demonstrations in the capital on Saturday.

In a separate incident, a police car stuck in a traffic jam in Lyon, southeastern France, was stoned by demonstrators.

President Emmanuel Macron condemned the abuse directed at Finkielkraut, tweeting: "The anti-Semitic insults he has been subjected to are the absolute negation of what we are and what makes us a great nation. We will not tolerate it."

The abuse -- including slogans such as "Dirty Zionist" and "France is ours" -- was caught on video and broadcast on television and social media.

The stoning incident in Lyon was also captured on video, with footage filmed from inside the police car showing dozens of protesters throwing stones at the vehicle.

"We're under attack and being stoned," a policeman reported.

Interior Minister Christophe Castaner described the actions of the protesters as "intolerable".

In Paris, 69-year-old Finkielkraut, who had voiced support for the "yellow vest" movement before later criticising it, denounced the protests as "grotesque"

"I felt absolute hatred and, unfortunately, this is not the first time," Finkielkraut told Journal du Dimanche.

"These demonstrations are a bit like the Golem (a mythical Jewish giant) it moves forward smashing all around it," he added.

The incident has rekindled claims by Macron that recent acts of anti-Semitic vandalism, including the painting of Nazi swastikas over portraits of famed French Holocaust survivor Simone Veil, was the work of far-left and far-right activists within the "yellow vest" movement.

The vandalism came amid reports of rising anti-Jewish offences -- up 74 per cent last year according to police -- which have caused alarm.

Fourteen political parties have called on people to demonstrate on Tuesday against anti-Semitism.

Government spokesman Benjamin Griveaux, speaking on LCI television, said no one should confuse genuine "yellow vest" protesters with extremists. But he warned that the movement had been "infiltrated" by far right and far left groups "who display crass anti-semitism".

The "yellow vest" protests, which have no organised leadership, began three months ago on November 17 over increasing fuel taxes.

They quickly grew into a broader anti-government rebellion fuelled by anger towards Macron.

Some 41,500 people took the streets on Saturday, according to police, the 14th consecutive Saturday of demonstrations across the country, well down on the 282,000 peak at the start of the protest.

There were clashes and arrests in several cities but the level of violence and number of demonstrators were down on the previous weekend.

An Ifop opinion poll, published Sunday by the Journal du Dimanche, said a majority -- 52 per cent -- now thought protests should stop, up 15 points on the start of the year.

And 38 per cent thought the protests should continue, according to the Ifop poll carried out on February 13 and 14.

Macron's popularity was up five points since the start of the year at 28 per cent, but 71 per cent remained dissatisfied with his performance, the poll said.

The president has pledged 10 billion euros ($11.2 billion) in response to anger over the high cost of living, including tax cuts for some pensioners and measures to boost low wages.

And he is spearheading a "grand national debate" by way of the internet and town hall meetings to gather opinions on how the country could be reformed.

On Sunday, some 2,000 protesters, some of them singing "happy birthday", marched down the famed  Champs-Elysees avenue, this time to mark the anniversary of the start of the movement.