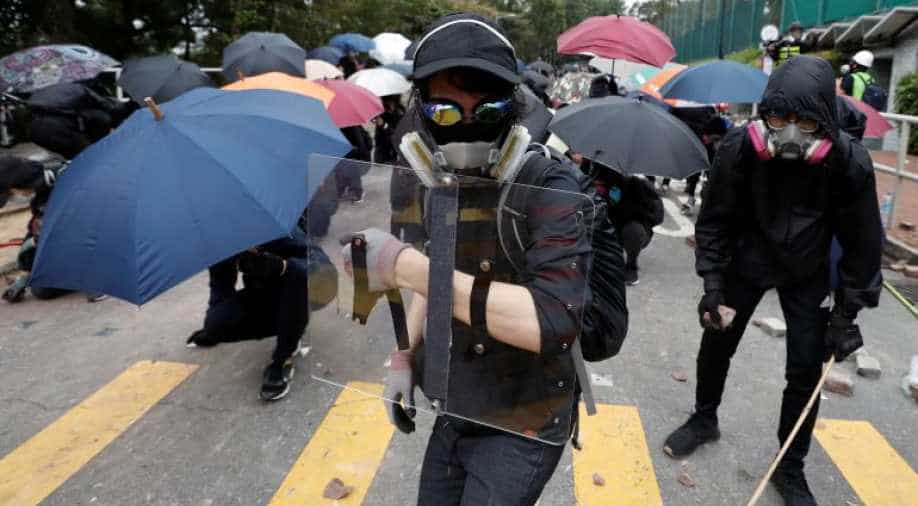 Demonstrators stand with shields and umbrellas during an anti-government protest at the Chinese University of Hong Kong in Sha Tin, Hong Kong, China November 12, 2019. Photograph:( Reuters )

A flash mob of more than 1,000 protesters, many wearing office clothes and face masks, rallied in Central for a second day during lunch hour.

Hong Kong police fired tear gas in the heart of the Central financial district and at two university campuses to break up pro-democracy protests as violence was bringing the Chinese-ruled city to what they said was the "brink of total breakdown".

The clashes came a day after police shot a protester at close range and a man was doused with petrol and set on fire in some of the worst violence in the former British colony in decades.

A flash mob of more than 1,000 protesters, many wearing office clothes and face masks, rallied in Central for a second day during lunch hour, blocking roads below some of the city's tallest skyscrapers and most expensive real estate.

After they had dispersed, police fired tear gas at the remaining protesters on old, narrow Pedder Street. Police made more than a dozen arrests, many pinned up on the pavement against the wall of luxury jeweller Tiffany & Co.

Police vans surged into the area, and officers took up positions in a standoff with protesters just an hour or so before office workers were due to start leaving for home.

"Our society has been pushed to the brink of a total breakdown," a police spokesman told a briefing, referring to the last two days of violence.

He said the man set on fire on Monday was still in critical condition and appealed for information on who was responsible.

Police on Monday fired volley after volley of tear gas in Central, where some protesters blocked streets lined with banks and jewellery shops. Most had pulled down their shutters on Tuesday.

Tension eased as the lunch hour ended, but some protesters used a double-decker airport bus to block a key road running alongside the newly reclaimed area of the harbour close to downtown Central.

Police also fired tear gas at City University in Kowloon Tong, beneath the Lion Rock, and at Chinese University on the other side of the mountain, where protesters threw petrol bombs and bricks at police.

Protesters at City University have stockpiled bricks and petrol bombs on the bridges and other approaches and were making small devices with nails, apparently to puncture tyres.

Streets inside and outside the Chinese University campus entrance were littered with bricks, other debris and small street fires as police tackled some protesters to the ground.

A van used as part of a street barricade was set ablaze.

The university said some people had broken into a storeroom and taken bows, arrows and javelins. All were later retrieved, it said.

"It’s crazy that police have been firing tear gas for more than 20 minutes. If they didn't come in, we wouldn't clash with them. It's our school. We need to protect our home,” Candy, 20, a student, told Reuters.

There was chaos earlier as people thronged metro stations only to stream out again after some train services were suspended.

Hong Kong leader Carrie Lam said protesters were being extremely selfish and hoped that universities and schools would urge students not to take part in the demonstrations.

More than 260 people were arrested on Monday, police said, bringing the total number to more than 3,000 since the protests escalated in June.

Protesters are angry about what they see as police brutality and meddling by Beijing in the freedoms guaranteed under the "one country, two systems" formula put in place when the territory returned to China in 1997.

China denies interfering and has blamed Western countries, including Britain and the United States, for stirring up trouble.

The United States on Monday condemned "unjustified use of deadly force" in Hong Kong and urged police and civilians alike to de-escalate the situation.

Chinese Foreign Ministry spokesman Geng Shuang urged Britain and the United States not to interfere in what was China's affair.

"The central government firmly supports the (special administrative region) government in implementing policies according to law, supporting the Hong Kong police in law enforcement, maintaining social order and protecting the safety of citizens," he told a briefing in Beijing.

China has a garrison of up to 12,000 troops in Hong Kong who have kept to barracks throughout the unrest, but it has vowed to crush any attempts at independence, a demand for a very small minority of protesters.