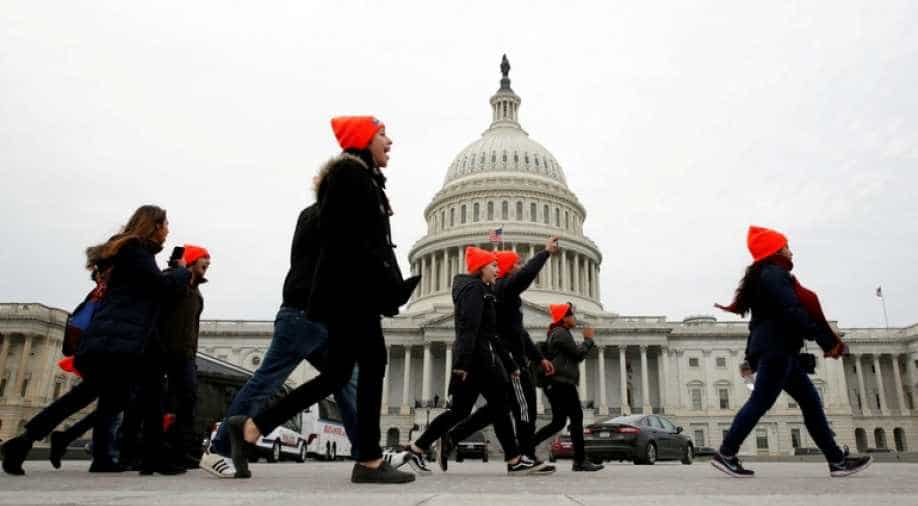 Protesters who call for an immigration bill addressing the so-called Dreamers, young adults who were brought to the United States as children, rally on Capitol Hill in Washington. Photograph:( Reuters )

The US Supreme Court on Monday required Arizona to continue to issue driver's licenses to the so-called Dreamers immigrants and refused to hear the state's challenge to an Obama-era program that protects hundreds of thousands of young adults brought into the country illegally as children.

The case centered on the Deferred Action for Childhood Arrivals (DACA) program created in 2012 under Democratic former President Barack Obama that Republican President Donald Trump already has sought to rescind. Those who signed up for DACA are shielded from deportation and given work permits.

The high court refused to hear Republican-governed Arizona's appeal of a lower court ruling that barred the state from denying driver's licenses to people protected under DACA.

"Arizona's inexplicable attempt to deny driver's licenses to Dreamers, pursued by two governors for years, has now failed at every level of the federal judiciary," said Jennifer Chang Newell, an attorney at the American Civil Liberties Union, which represented the immigrants in the case.

The justices on Feb. 26 required the Trump administration to keep DACA in place at least for now, turning away its appeal of a judge's nationwide injunction that halted the president's September order to begin winding down the program in March. A second federal judge has since issued a similar injunction.

After DACA was put in place under Obama, Arizona's governor at the time, Republican Jan Brewer, directed state officials to prevent the program's recipients from obtaining a driver's license in the state.

Non-citizens must prove they are authorized to be in the United States to obtain an Arizona driver's license, such as with a valid federal work permit. The state decided not to accept permits obtained by DACA recipients.

The ACLU sued on behalf of a group of DACA recipients who were denied driver's licenses. Arizona was the only state to deny licenses to DACA recipients, according to court papers.

The San Francisco-based 9th US Circuit Court of Appeals last year struck down the Arizona policy, ruling that the state cannot develop its own definition of immigrants who are authorized to be in the United States and that only the federal government had that power.

Arizona appealed to the Supreme Court, saying the 9th Circuit's decision ran roughshod over state sovereignty. Arizona said DACA was enacted through a Department of Homeland Security memo, not legislation in the U.S. Congress or a formal agency rule-making process, and could not supersede state law regulating driver's licenses.

The Trump administration urged the justices not to take the case, saying the president's move to rescind the policy means the state's concerns have already been addressed.