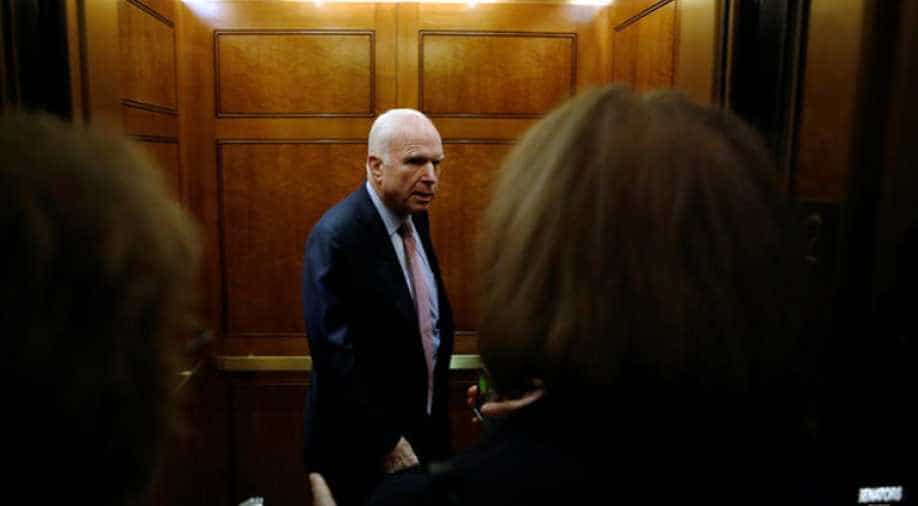 The announcement by McCain, a Republican who has often been at odds with Trump and who cast a crucial 'no' vote in July that helped defeat an earlier Republican repeal bill, had the potential to up-end McConnell's plans.

US Senator John McCain said on Friday he opposes the latest Republican bill to dismantle Obamacare, dealing the measure what could be a fatal blow given the party's slim Senate majority.

With several other Republicans still undecided on the measure, Senate Majority Leader Mitch McConnell said earlier this week he intended to bring it to the Senate floor for a vote next week, though he did not promise to do so.

A vote would set the stage for another dramatic Capitol Hill decision on the 2010 law that brought health insurance to millions of Americans and became former Democratic President Barack Obama's signature domestic achievement.

For seven years, Republicans have hammered Obamacare as an unwarranted government intrusion into American healthcare. President Donald Trump made repealing Obamacare one of his top campaign promises in 2016. Democrats have fiercely defended it.

The announcement by McCain, a Republican who has often been at odds with Trump and who cast a crucial "no" vote in July that helped defeat an earlier Republican repeal bill, had the potential to up-end McConnell's plans. McConnell's office did not immediately respond to requests for comment.

At a rally in Alabama, Trump said McCain's decision was "totally unexpected, terrible." Despite the setback, Trump said: "We still have a chance. We're going to do it eventually."

Republicans have only a narrow Senate majority and cannot afford to lose many votes on the bill. They are also on a tight timetable.

McConnell has been trying to schedule a vote on the bill by Sept. 30, the last day on which the bill could pass with only a simple majority of 51 votes in the Senate. A vote taken any later than that would have to garner at least 60 votes for passage.

Weeks after the humiliating defeat in July, when the Obamacare repeal fight seemed to be over, the current bill was introduced by Republican Senators Bill Cassidy and Lindsey Graham, a close friend of McCain's, and seemed to gain momentum.

But McCain on Friday laid out his opposition in a statement: "I cannot in good conscience vote for the Graham-Cassidy proposal." He said he took no pleasure in announcing his opposition and noted that the bill's authors "are my dear friends."

McCain complained about the rushed process Republicans used to push the bill forward. He said he would consider supporting a bill like it if it had emerged from extensive hearings, debate and amendment. "But that has not been the case," he said.

McCain, who cast his "no" vote in July just days after being diagnosed with an aggressive brain cancer, said he could not support the bill without knowing how much it would cost, how it would affect insurance premiums and "how many people will be helped or hurt by it," information that will not be available until the non-partisan Congressional Budget Office provides a full assessment at the end of September.

The Graham-Cassidy bill would take the federal money spent on the Medicaid program for the poor and disabled, as well as subsidies to help Americans buy private insurance and divvy it up to the states in block grants. Advocates say that would give states more discretion to manage their own healthcare schemes.

Although the CBO has not yet fully assessed the bill's effects, independent analyses indicate it would fundamentally redistribute federal healthcare money, generally with Republican-leaning states benefiting and Democratic-leaning states losing, largely because a majority of the states that opted to expand Medicaid under Obamacare were Democratic-leaning.

A Washington Post-ABC News opinion poll said Americans prefer Obamacare to the Graham-Cassidy alternative by 56 per cent to 33 per cent.

Graham said in a statement he was not giving up. "We press on," he said.

Shares of health insurers turned up after McCain announced his oppositions. Centene ended 1.6 per cent higher while Humana closed up 0.2 per cent, reversing earlier losses.

Winners and Losers among states

State-by-state impacts from Graham-Cassidy would vary, the Axios news website reported on Friday, citing a study by the Centers for Medicare and Medicaid Services (CMS), the unit of the Department of Health and Human Services that oversees Medicaid and the Obamacare program.

The CMS study found that by 2026, Alaska would lose 38 per cent of its federal funding for insurance subsidies and Medicaid; Arizona would lose 9 per cent; Maine would gain 44 per cent; Ohio would lose 18 per cent; and West Virginia would lose 23 per cent, Axios reported.

The CMS had no immediate comment on the Axios report.

Besides McCain, Kentucky's Rand Paul is the only other Republican senator who has publicly said he opposes the bill.

Maine's Susan Collins said she was leaning against the bill, the Portland Press-Herald newspaper reported on Friday. Kansas' Jerry Moran is also undecided.

No Democrats support the bill.

To pass Graham-Cassidy, the Republicans need at least 50 votes in the 100-seat Senate, which they control 52-48, with Vice President Mike Pence casting a potential tie-breaking vote.

The insurance industry, hospitals, medical advocacy groups such as the American Medical Association, American Heart Association and American Cancer Society, the AARP advocacy group for the elderly and consumer activists oppose the bill.

The Center on Budget and Policy Priorities, a liberal think tank in Washington, estimated the bill would cause more than 30 million people to lose insurance.