US sees strong shared interests with EU on Iran concerns 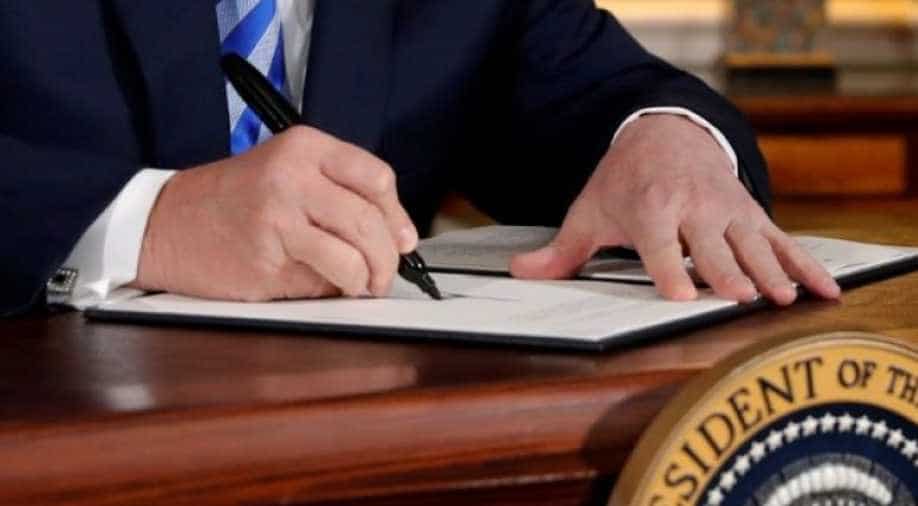 U.S. President Donald Trump signs a proclamation declaring his intention to withdraw from the JCPOA Iran nuclear agreement in the Diplomatic Room at the White House in Washington, U.S. May 8, 2018. Photograph:( Reuters )

The United States on Sunday said it hopes to use strong shared interests that have emerged with its European Union partners in recent months to move forward on addressing Iran's nuclear programme, missile development and role in regional conflicts.

A State Department official said the shared interests could form a 'foundation to continue to work together moving forward.'

Iran said on Sunday that it would join a meeting with diplomats from Britain, Germany, France, China and Russia in Vienna on Friday to discuss next steps after the May 8 decision by US&nbspPresident Donald Trump to exit the 2015 nuclear accord.

It said Washington would not participate in the meeting of the joint commission set up by the six world powers, Iran and the European Union to handle any complaints about the deal's implementation.

The German newspaper Welt am Sonntag cited an unnamed senior EU official as saying there were also discussions about a possible new pact between Iran and world powers that would cover the same ground as the 2015 deal but with some additions to appease the United States.

These could include provisions to address US&nbspconcerns over Iran's ballistic missile programme and Tehran's support of armed groups in the Middle East, the source said.

"We have to get away from the name 'Vienna nuclear agreement' and add in a few additional elements. Only that will convince President Trump to agree and lift sanctions again," the senior EU official told the paper.

Such an agreement could in the future include financial aid for Iran, the report said.

The State Department official said Washington hoped the EU would focus "on the central issue here: &nbspIran's multiple set of malign behaviors with regard to its nuclear program, missile development, terrorism, regional conflicts, and other issues."

Three EU sources who were part of negotiations to keep Trump from quitting the nuclear deal said Friday's meeting would address only the implementation of the 2015 deal, but not offer Iran financial aid in exchange for concessions.

"A meeting set for the next few days for the first joint commission without the United States ... will only cover issues of the nuclear accord between Iran and the other members," Qasemi said.

Earlier, Deputy Foreign Minister Abbas Araqchi said on state television that the "joint commission ... will be held at Iran's request, and without the United States, to discuss the consequences of America's withdrawal, and how the remaining countries can continue their commitment to the deal."

On Monday, US&nbspSecretary of State Mike Pompeo will outline a "diplomatic roadmap" and call for broad support from European and other allies to apply pressure on Iran to force it back to the negotiating table, as well as their support to address "the totality of Iran's threats".

Ford not able to deliver cars due to lack of badges