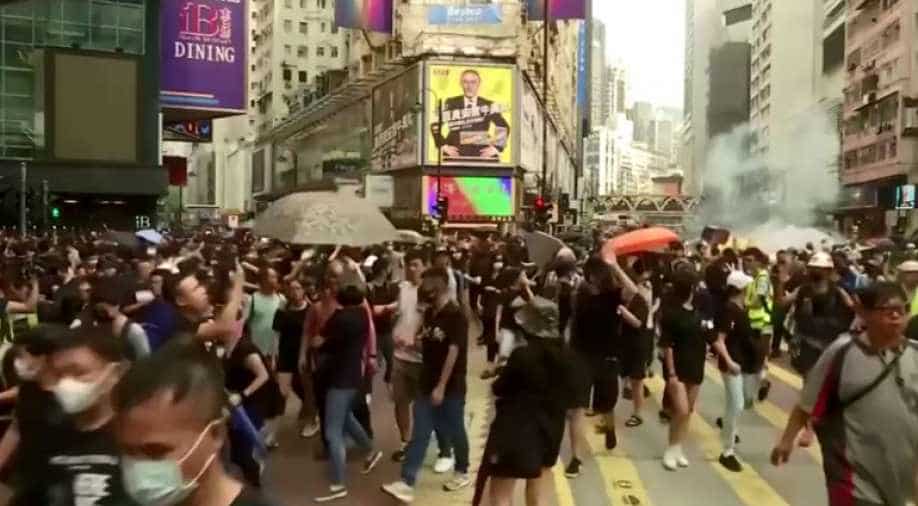 Hong Kong has seen relentless protests since June as many in the city of 7.5 million people have vented fury at eroding freedoms under Chinese rule

Thousands of pro-democracy protesters took to Hong Kong's streets Friday, defying a warning by Chinese President Xi Jinping, as a campaign of mass disruption extended into a fifth straight day.

Hong Kong has seen relentless protests since June as many in the city of 7.5 million people have vented fury at eroding freedoms under Chinese rule.

Those protests had been mainly in the evenings and on weekends, allowing the international financial hub to still function relatively smoothly during the week albeit with its economy dragged into recession.

With China offering no concessions, protesters switched tactics on Monday when they launched a "blossom everywhere" campaign to cause as much disruption as possible across Hong Kong and overwhelm the police force.

Their actions through the week have caused chaos across Hong Kon and been accompanied by intensifying violence from both sides -- two people have died in a week in incidents linked to the protests.

The five-day 'strike' has also seen major universities become a hub for the protesters - the first time a movement characterised by its fluidity and unpredictability has coagulated in fixed locations.

Violence from both sides has also escalated, and tensions have spilt out overseas.

On Thursday night Hong Kong Justice Secretary Teresa Cheng fell in London after being surrounded by pro-democracy protesters, in the most physical confrontation involving a member of the cabinet since the unrest began.

Hong Kong leader Carrie Lam on Friday condemned the incident, describing it as a "barbaric attack".

Cheng walked away from the confrontation without any visible signs of injury.

On Friday a "Lunch With You" event saw thousands of mainly office workers take to the city's streets, many chanting "Stand with Hong Kong" and raising an open hand with five fingers splayed.

It is a reference to the five demands of the protest movement, which include the right to freely elect Hong Kong's leaders, as well as an independent inquiry into alleged police brutality.

"The government did not respond even when two million residents marched peacefully," a 25-year-old office worker who gave her surname as Wong said in the city's Central district, in reference to huge rallies that were a feature of the start of the movement.

"Now when the police are abusing their power the government... only thinks protesters are the problem."

The unrest was triggered by opposition to Hong Kong's government plan to introduce a law allowing the extradition of criminal suspects to mainland China.

The government belatedly withdrew the bill months into the unrest, but by then it had morphed into a much wider campaign for democratic freedoms and against the police.

Chinese President Xi on Thursday backed Lam and the police force while warning the protest movement was threatening the "one country, two systems" principle governing the semi-autonomous city.

Hong Kong has been ruled by a unique system guaranteeing greater freedoms than on the mainland since its handover from British rule to China in 1997.

With the crisis deepening by the week, fears have grown that Xi's patience will run out and Chinese troops will be deployed into to Hong Kong.

The Global Times, one of the powerful arms of the Chinese state media, on Thursday fuelled tensions with a tweet reporting that a curfew was imminent.

The Global Times quickly withdrew the tweet and the Hong Kong's government denied a curfew was planned.

But Chinese state media continued to pile on the pressure on Friday, calling for tougher action from the government and indicating a curfew was still on the cards.

"While it remains to be seen whether a curfew will be introduced, tougher action is undoubtedly called for," the China Daily, an English-language newspaper, said in an editorial.

Chinese media has repeatedly seized on violence from the protesters as the justification of a crackdown.

A 70-year-old man died on Thursday from injuries sustained a day earlier when he was hit by a brick during clashes between protesters and people angry with them.

Police on Friday said they had opened a murder case into the man's death.

On Monday a man arguing with protesters was set on fire by a black-clad masked person, with that incident caught on camera and posted online.

On the same day, a police officer shot an unarmed protester at close range.