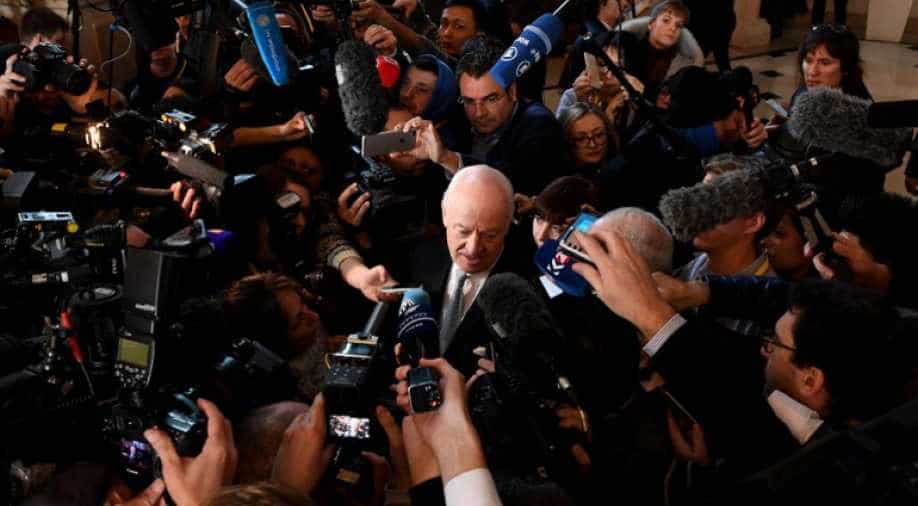 The rebels rejected face-to-face talks because of the regime's continued bombardment and attacks on a flashpoint outside the capital Damascus. Photograph:( AFP )

Iran, Russia and Turkey, the sponsors of peace talks between Syrian rebels and Damascus, agreed on Tuesday to a fragile three-week cessation of hostilities in Syria. The announcement comes after two days of peace talks in the Kazakh capital, Astana.

In a joint statement, the three countries said there was no military solution to the Syrian conflict.

It was not clear whether the Syrian government or the opposition backed the communique. Earlier, a rebel spokesman said "no agreements" would be signed.

The "trilateral mechanism" was agreed between Russia and Iran, which back Mr Assad's government, and Turkey, which supports the opposition.

It would "observe and ensure full compliance with the ceasefire, prevent any provocation and determine all modalities", the statement said.

Earlier, however, the Guardian reported that rebel officials objected to Iran having a role because of its support of militia groups, which they accuse of repeatedly violating the cessation of hostilities.

Government negotiator Bashar Jaafari had accused rebel groups of violating the truce and defending "war crimes" by the allied jihadist group Jabhat Fateh al-Sham, which is excluded from the ceasefire along with so-called Islamic State (IS).

The talks in Astana were the first where the opposition delegation was formed exclusively of representatives of armed groups.

Rebel spokesman Yahya al-Aridi had earlier said that his delegation would also push for the lifting of government sieges of opposition-held areas and "goodwill gestures", including the release of political detainees and aid deliveries.

He added that it was hoped the meeting would "contribute" to the UN-brokered negotiations on a political settlement that are due to resume in Geneva next month.

The negotiations in Geneva broke down last April with little progress having been made.

More than 300,000 people have been killed and 11 million others displaced since the uprising against President Bashar al-Assad began in March 2011.