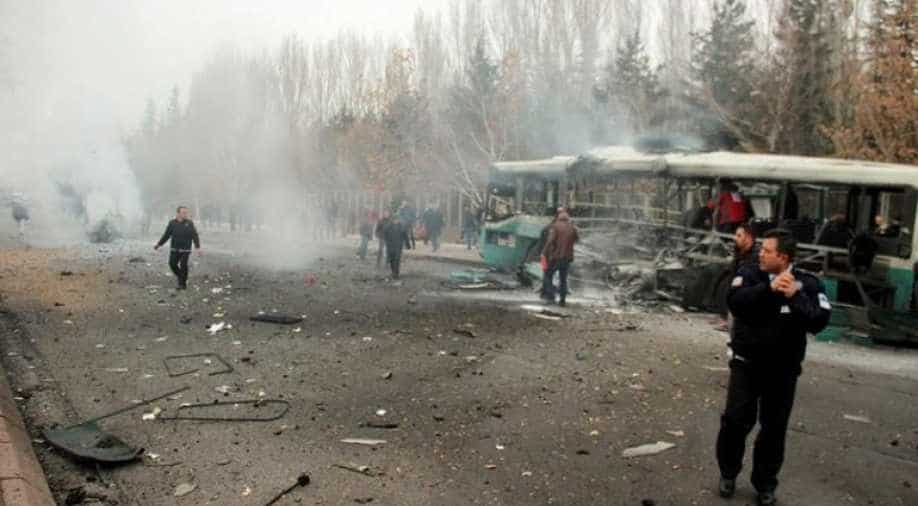 Initial television pictures showed that the bus had been reduced to a smouldering wreck by the impact of the blast. Photograph:( AFP )

Fourteen Turkish soldiers were killed and dozens more wounded on Saturday in a suicide car bombing blamed on Kurdish militants targeting off-duty conscripts, the latest in a string of attacks to rock Turkey in recent months.

The government said all signs so far suggested the outlawed Kurdistan Workers Party (PKK) was behind the bombing in the city of Kayseri, a usually calm industrial hub in the heart of Anatolia.

With tensions soaring in Turkey, nationalist protesters attacked the offices of the pro-Kurdish Peoples' Democratic Party (HDP) in Kayseri as well as seven other locations in Istanbul and across the country.

Interior Minister Suleyman Soylu said a total of 56 people were wounded, half a dozen of them seriously. The death toll rose from 13 to 14 after one more soldier died in hospital, the official Anadolu news agency said.

Television pictures showed the bus reduced to a smouldering wreck by the blast, which came a week after 44 people were killed in a double bombing in Istanbul after a football match hosted by the top side Besiktas.

That attack, which targeted a police bus, was claimed by the Kurdistan Freedom Falcons (TAK) seen as a radical offshoot of the PKK. No claim has been made so far for the Kayseri bombing.

He said that the materials used in the bombing were similar to those used in the Istanbul attack last week.

"You don't just buy these at the shopping mall... there is a logistical support," he said.

Prime Minister Binali Yildirim said that the attack was carried out by a "suicide bomber", without giving further details.

Fifteen suspects have already been detained over alleged involvement in the plot, Kayseri state prosecutor Mustafa Arslanturk was quoted as saying by Anadolu.

The bus, carrying low-ranking privates and non-commissioned officers, was attacked after leaving the commando headquarters in the city to take the off-duty soldiers on a shopping trip.

Those killed were in their early 20s, reports said. Turkish television broadcast harrowing footage of relatives bidding farewell to the coffins at a military airport.

Turkey's President Recep Tayyip Erdogan said that the "acts of terror" in Turkey were "aiming at all 79 million of our citizens together with our soldiers and police".

"We will fight decisively against these terror organisations in the spirit of a national mobilisation," he said.

Turkey has seen a spate of deadly bombings in a bloody 2016 blamed both on jihadists and Kurdish militants that have left dozens dead and put the country on daily alert.

In June, 47 people were killed in a triple suicide bombing and gun attack at Istanbul's Ataturk airport, with authorities blaming the Islamic State group.

Another 57 people were killed in August in a suicide attack by an IS-linked bomber at a Kurdish wedding in the southeastern city of Gaziantep.

Kurdish militants have twice struck with bombings that killed dozens in Ankara in February and March.

The attacks have come with the civil war still raging in neighbouring Syria, where Turkey is staging its own incursion to expel jihadists and Kurdish militia from the border area.

Turkey is also still reeling from a failed July 15 coup blamed on the US-based Islamic preacher Fethullah Gulen that has been followed by a relentless purge of his alleged supporters from all state institutions.

One of the main cities of central Turkey, Kayseri is a key industrial hub with a population of over one million and a stronghold of Turkish nationalists.

The city lies close to the famous landscapes of Cappadocia, a magnet for tourists around the world, and well west of the main fighting between PKK and security forces in the south-east.

Its offices were also attacked by protesters in seven districts of Istanbul as well as four other towns and cities across Turkey, the HDP said.

"Those who fail to take measures to prevent these attacks give an opportunity for provocations," it said in a statement.