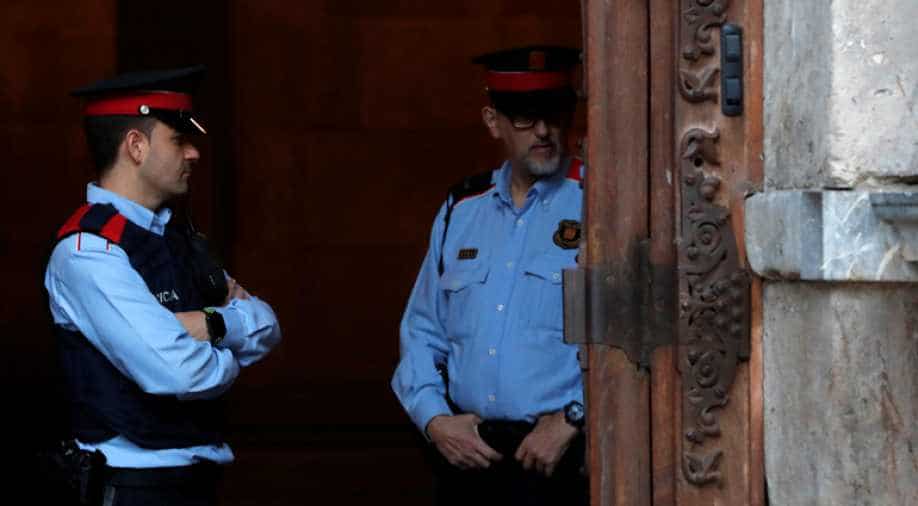 Spain's direct rule over Catalonia took hold on Monday as state employees turned up for work despite calls for disobedience, and pro-independence parties said they would contest an election, implicitly accepting the regional government had been sacked

Spain's direct rule over Catalonia took hold on Monday as state employees turned up for work despite calls for disobedience, and pro-independence parties said they would contest an election, implicitly accepting the regional government had been sacked.

Spanish media reported that ousted Catalan president Carles Puigdemont had left for Belgium with several other members of his sacked administration.

Spain's state prosecutor, Attorney-General Jose Manuel Maza, called for charges of rebellion and sedition, as well as fraud and misuse of funds, to be brought against Catalan leaders.

Catalonia, a prosperous region with its own language and culture, triggered Spain's biggest crisis for decades by holding an independence referendum on October 1, which Spanish courts called illegal.

Prime Minister Mariano Rajoy assumed direct control of the region on Friday, sacked its secessionist government and called a snap election for December 21.

Monday's calm on the streets of Barcelona resolved a weekend of uncertainty during which is was not clear how the region would respond to central control. Some of the most prominent Catalan leaders, including Puigdemont and vice-president Oriol Junqueras had said they would not accept their dismissal.

But their respective political parties, PdeCat (Catalan Democratic Party) and Esquerra Republicana de Catalunya (Catalan Republican Left) said on Monday they would take part in the snap election, a tacit acceptance that parliament had been dissolved.

The regional legislature cancelled a meeting for Tuesday, another signal lawmakers accepted they had been dismissed.

Newspaper La Vanguardia said Puigdemont would make a statement on Monday afternoon. La Sexta television said he could seek asylum in Belgium together with five other sacked members of his administration.

A call for widespread civil disobedience from the main civic groups behind the secessionist campaign failed to attract many followers. Most public sector workers such as teachers, firefighters and the police started worked as normal on Monday and there was no sign of widespread absenteeism.

Things have to carry on

Sacked Catalan leaders have remained ambiguous but they stopped short of directly defying Spain's authority. There were no signs of any spontaneous demonstration taking place.

Puigdemont posted a picture on Instagram taken in the regional government headquarters, but was not seen entering, suggesting the photo may have been taken by someone else.

Regional transport chief Josep Rull posted on Twitter a picture of him working in his office but he was later seen leaving the building. Spain's transport minister had said in a radio interview Rull would be allowed to collect his personal belongings but not work there.

When he left, Rull said he would now attend a PdeCat party meeting: "Let's go on with the scheduled agenda," he said.

Other regional leaders did not turn up to their offices though some of their staff did. One of 140 senior officials appointed directly by the outgoing government described the situation as "normal" and said he had not yet received any letter of dismissal.

"We civil servants want everything to be normal. Things have to carry on. The day-to-day work still has to be done," said the official, who works with the outgoing vice-president, Junqueras.

Two hundred thousand public sector workers receive salaries paid by the Catalan region, and another 100,000 in the region rely directly on the Madrid government.

Hundreds of thousands of supporters of a unified Spain marched on Sunday in one of the biggest shows of force yet by the so- called silent majority that has watched as regional political leaders push for Catalan independence.

Two opinion polls also showed support for independence may have started to wane. A Sigma Dos survey published in El Mundo showed 33.5 per cent Catalans were in favour of independence while a Metroscopia poll published by El Pais put that number at 29 pe rcent. This compared to 41.1 per cent in July according to an official survey carried out by the Catalan government.

Opponents of secession largely boycotted the October 1 referendum, when participants voted overwhelmingly for independence on turnout of 43 per cent.

Spain's interior ministry named a new chief for the regional police on Saturday who has insisted that the 17,000 officers of the force should remain neutral. Interior Minister Juan Ignacio Zoido met the new police chief in Madrid on Monday.

The force has already withdrawn protection for sacked regional government members, who were also left without their official cars. Their portraits were removed from the walls of public buildings.

The government's move to impose direct rule received the backing of several influential Catalan business lobbies who called on firms to stay in the region. The chaos has prompted an exodus of businesses from Catalonia, which contributes about a fifth of Spain's economy.