Spain's Catalan separatists let out of jail for induction as MPs 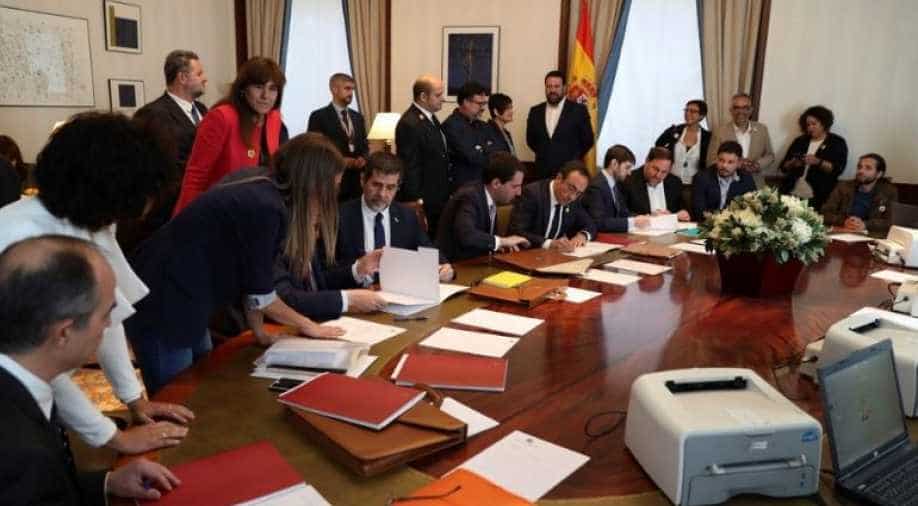 Jailed Catalan separatists and elected members of parliament Jordi Turull , Jordi Sanchez, Josep Rull and Oriol Junqueras register as MPs at the Parliament building in Madrid on May 20, 2019, after being temporarily released from jail. Photograph:( AFP )

The four MPs and a senator, elected in April, arrived at the two chambers early Monday in military police vehicles. They were barred from speaking to reporters.

Catalan separatists were released from jail on Monday to obtain their formal certificates as elected MPs the day before the Spanish parliament is to open in Madrid.

The four MPs and a senator, elected in April, arrived at the two chambers early Monday in military police vehicles. They were barred from speaking to reporters.

The five, who have been in custody for more than a year, will return to their cells at the Soto del Real prison near Madrid after carrying out the formality.

The Supreme Court, which has been trying the men for their role in an October 2017 secession attempt in Catalonia, ruled last week that they could also attend the opening session of parliament and take the oath of office on Tuesday.

But the court ruled against definitively releasing the five, who include the former vice president of the wealthy northeastern region, Oriol Junqueras.

And parliament is to decide whether to suspend their functions as lawmakers until the top court reaches a verdict on the rebellion charges against them.

Junqueras, 50, was elected an MP as a member of the Republican Left of Catalonia (ERC). He faces 25 years in prison in Catalonia.

The others include civic leader Jordi Sanchez and Jordi Turull, Catalonia's government spokesman at the time of the failed attempt to break from Spain.

Both were candidates for Together for Catalonia, the party of Catalonia's former president Carles Puigdemont, who fled Spain and avoided arrest.

They were all part of a push to hold an independence referendum in October 2017 in defiance of a court ban.

That sparked Spain's deepest political crisis in decades, with the referendum followed by a short-lived declaration of independence.

As such, Sanchez could need the backing of Catalan separatist lawmakers like the five jailed politicians.

During the parliament's opening session, the five Catalan lawmakers will have to promise to honour the Spanish constitution which calls for the "unbreakable unity" of Spain.