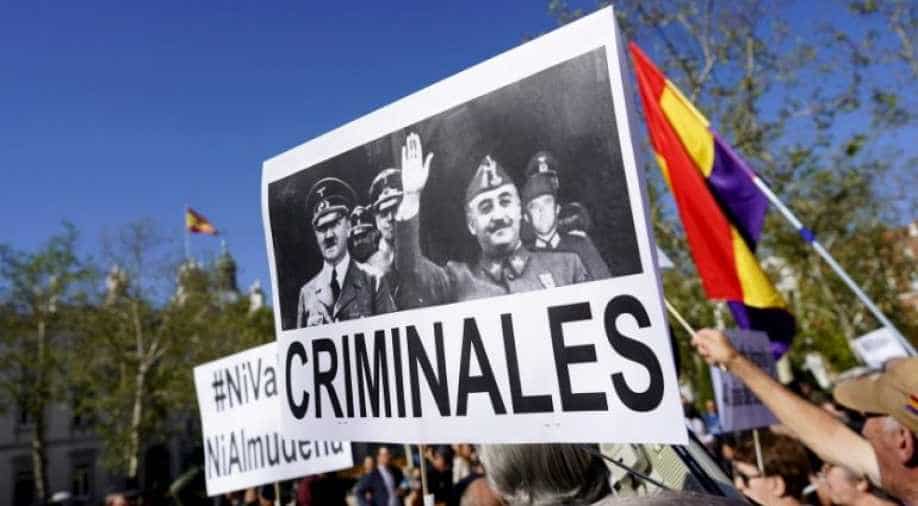 Protester carries a banner with the picture of Adolf Hitler and Francisco Franco. Photograph:( Reuters )

The ruling Socialists have long sought to exhume Franco's remains and turn the Valley of the Fallen complex into a memorial to the 500,000 people who were killed during the civil war he unleashed.

Spain will on Thursday remove dictator Francisco Franco's remains from the state mausoleum in which he was buried in 1975, the government said on Monday.

The ruling Socialists have long sought to exhume Franco's remains and turn the Valley of the Fallen complex near the capital Madrid into a memorial to the 500,000 people who were killed during the 1936-39 civil war he unleashed.

The family disputed the exhumation in courts but the Supreme Court rejected their appeal last month. The government had said it would go ahead with its plan by the end this week, and on Monday gave the day and time of the exhumation.

The late dictator's family will attend the removal of his remains from the monument's central basilica at 1030 (0830 GMT) on Thursday, the government said in a statement.

He will be buried alongside his wife in the Mingorrubio El Pardo cemetery north of Madrid.

The Valley of the Fallen mausoleum holds the bodies of 34,000 Spaniards who died during the war, including many from the losing Republican side whose bodies were moved there during Franco's rule without the permission of their families.

Neither media nor the general public will be allowed to watch the proceedings, in preparation of which the government shut the Valley of the Fallen.

The location of Franco's tomb continues to fracture Spanish opinion with 43 per cent in favour of the move and 32.5 per cent against, according to a poll published by El Mundo last week.

Spain is facing its fourth election in four years in November and moving Franco's remains from the state mausoleum had long been a Socialist pledge.