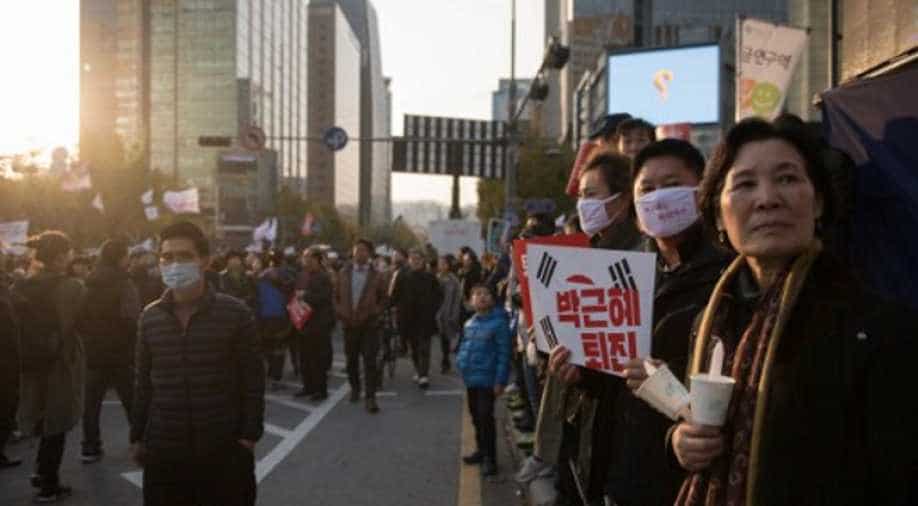 On October 25, she had publicly apologised for seeking the advice of her friend, Choi Soon-sil, who is currently under arrest on charges of fraud and abuse of power. Photograph:( AFP )

South Korean President Park Geun-hye faced mounting calls to step down as a record number of people came out on the streets in one of the largest anti-government protests seen in Seoul on Saturday.

The people are demanding her resignation over allegations that she allowed a friend to meddle in state affairs and wield influence.

"Of course she must step down," Jung Sun-hee, a 42-year-old homemaker who attended the rally with her husband and two pre-teen daughters, said. "I believe we need a new person to break through this situation, who will be better than this one."

A court in Seoul had allowed the crowd to hold a march in the evening to within a few blocks of the presidential Blue House compound. Unlike the previous protests that had turned violent, there was a largely peaceful atmosphere on Saturday's march.

It was third in a series of weekly mass protests that have left Park fighting for her political survival. On October 25, she had publicly apologised for seeking the advice of her friend, Choi Soon-sil, who is currently under arrest on charges of fraud and abuse of power.

Park's offer to work with the parliamentary opposition to form a new cabinet and relinquish some power failed to calm public anger. Prosecutors are investigating allegations that her friend had leveraged their personal relationship to coerce donations from large companies to non-profit foundations which she set up and used for personal gain. She is also accused of interfering in government affairs, despite holding no official position.

Opposition parties have also called for her resignation, indicating that there was a growing opinion in Parliament to take action to remove Park from power, but there has been no formal move yet to launch impeachment proceedings.