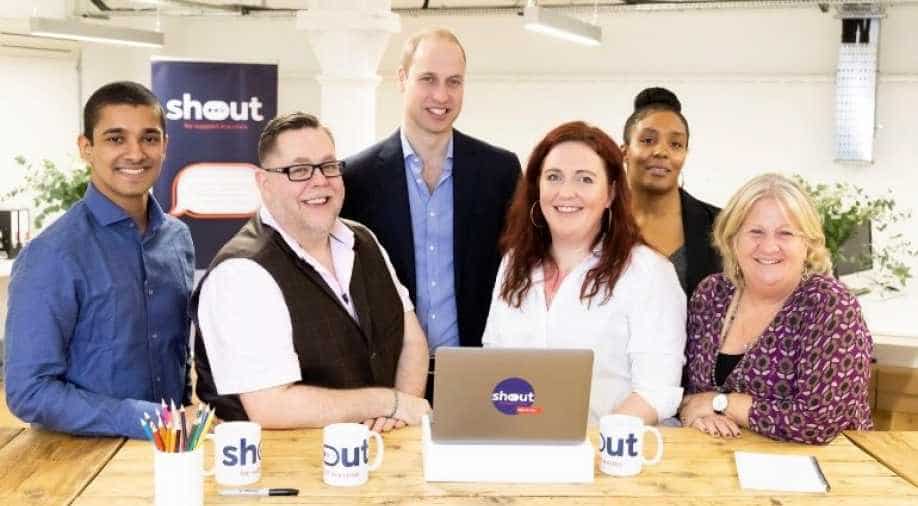 Kate Middleton has also been calling people who are self-isolating or vulnerable, as part of the Royal Voluntary Service's National Health Service (NHS) Volunteer Responders scheme.

Britain's Prince William, the Duke of Cambridge, has revealed that he has been secretly volunteering for a mental health charity during the coronavirus pandemic.

The 37-year-old second in line to the British throne is among 2,000 volunteers who completed a training session and has been responding to text messages from those seeking advice and support through the Shout 85258 phone service.

He told fellow volunteers in a video call: "I'm going to share a little secret with you guys, but I'm actually on the platform volunteering."

Kensington Palace announced the royal's involvement to mark the ongoing Volunteers Week, which ends on Sunday. Those using the service would not know if the response is from Prince William, who would be using a pseudonym.

William and wife Kate Middleton, the Duchess of Cambridge, had helped to launch Shout 85258 last year investing 3 million pounds in the service through their Royal Foundation.

William's younger brother, Prince Harry, and his wife Meghan Markle, the Duke and Duchess of Sussex, were a part of the effort at the time but have since quit from frontline royalty.

The Shout service said that more than 300,000 text conversations have taken place since its launch in May 2019.

Around 65 per cent of those texting are aged under 25, the charity said, with many messengers seeking mental health support.

This week, the Duke and Duchess of Cambridges also made video calls to Conscious Youth, which has set up a virtual youth club to support members in West Yorkshire region of England, and Machynlleth Community Corona Response, in Powys, Wales.

"One of the things that would be amazing, I think, is if everyone in their communities is to carry on and still celebrate volunteering in the way that everyone has been during the pandemic. Everyone's got something to give back," Middleton said.

She has also been calling people who are self-isolating or vulnerable, as part of the Royal Voluntary Service's National Health Service (NHS) Volunteer Responders scheme.

The royal couple are reportedly considering how best to return to resuming royal engagements in person as the coronavirus lockdown begins to be gradually ease, while not encouraging crowds, breaking social distancing, or putting pressure on police resources.