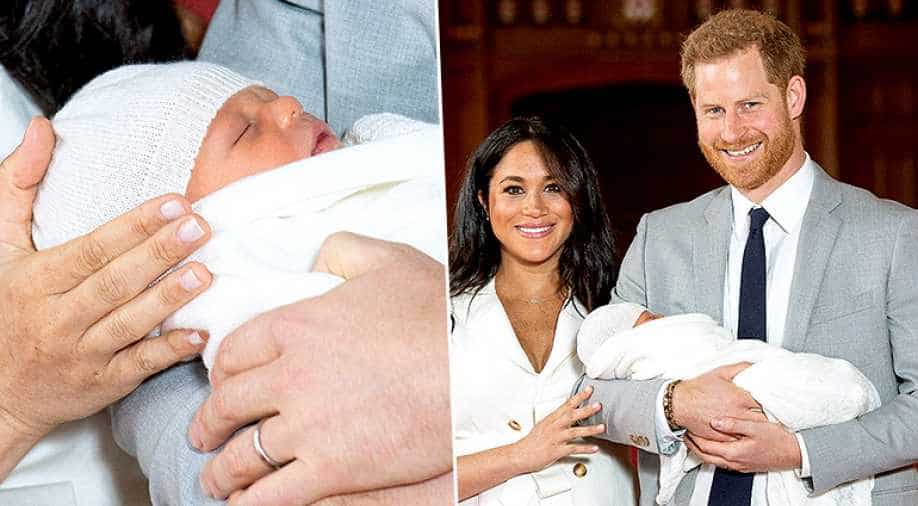 Prince Harry and Meghan Markle with their son. Photograph:( AP )

"The Duke and Duchess of Sussex are pleased to announce they have named their first born child: Archie Harrison Mountbatten-Windsor," the couple announced on their Instagram account, ending months of speculation.

Britain's Prince Harry and wife Meghan on Wednesday announced their new "dream" son's name is Archie, hours after showing him off to the world for the first time.

"The Duke and Duchess of Sussex are pleased to announce they have named their first born child: Archie Harrison Mountbatten-Windsor," the couple announced on their Instagram account, ending months of speculation.

The informal choice defied the bookmakers' predictions and confirmed the couple's determination not to be bound by tradition.

Archie's proud parents emerged in front of the cameras inside Windsor Castle earlier Wednesday to show off their son, ahead of introducing him to great-grandmother Queen Elizabeth II.

"He's just been a dream," said a smiling Meghan, 37, in her first public comments since giving birth to the seven-pound, three-ounce (3.26-kilogram) baby, who stayed firmly asleep during his public unveiling.

"He has the sweetest temperament. He's really calm," added the Duchess of Sussex, as Prince Harry cradled the newborn, wrapped in a white blanket, by her side.

Royal watchers had been desperate for a glimpse of the new baby, who is seventh in the line to the British throne, ever since the couple announced his birth to their 6.5 million followers on Instagram with the message "It's a BOY!"

"Parenting is amazing," said 34-year-old Harry, the day after brother Prince William -- two years his senior and with three children of his own -- had jokingly welcomed him to the "sleep deprivation society that is parenting".

"We're just so thrilled to have our own little bundle of joy."

Meghan added: "It's been a special couple of days."

Ayushmann Khurrana takes internet by storm with his 'Joker' look