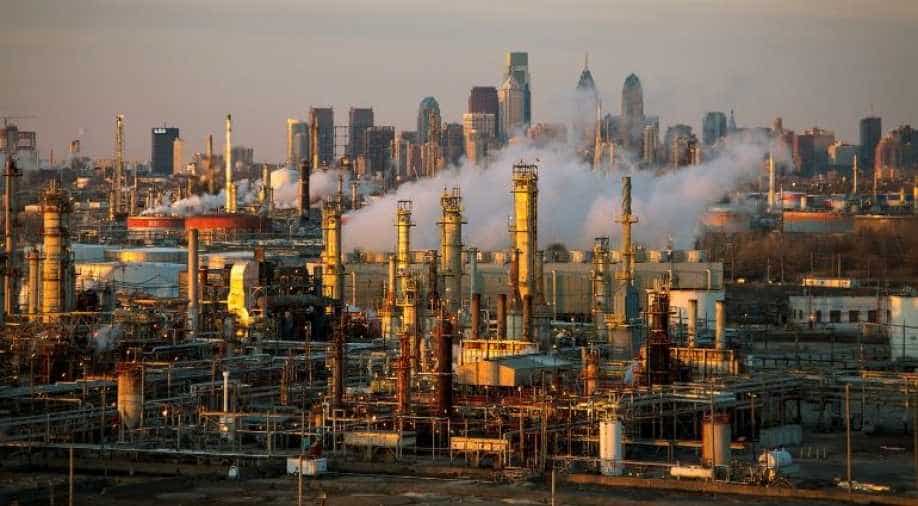 Aerial video of the scene at Philadelphia Energy Solutions Inc's refinery, the largest in the northeast, on local television showed significant damage and the massive complex nearly engulfed in flames.

Massive explosions that engulfed a Philadelphia refinery in flames on Friday have renewed concerns about the oil industry's use of a highly toxic chemical to make high-octane gasoline at plants in densely populated areas.

Aerial video of the scene at Philadelphia Energy Solutions Inc's refinery, the largest in the northeast, on local television showed significant damage and the massive complex nearly engulfed in flames.

One of the explosions took place in a hydrofluoric acid alkylation unit - a chemical processing unit that has been involved in three near-misses of releases into cities in California, Texas, and Wisconsin, according to safety officials.

Hydrofluoric acid (HF) can form a toxic cloud at room temperature while exposure can lead to severe health problems and even death.

Around the Philadelphia refinery, air quality had not yet been cited as a problem. There are about 300,000 people who live within three miles (5 km) of the facility.

There have been campaigns by residents who live near refineries, environmental groups, and the country's largest industrial labour union to end the use of HF in units that produce octane-boosting components for gasoline.

Fifty, or more than a third, of 135 US refineries operate HF alkylation units, according to the Chemical Safety Board (CSB), which investigates industrial fires and explosions.

In April, the CSB called on the US Environmental Protection Agency to revisit a study on HF's use and the potential to replace it with another process after hearing from worried residents during its probe of a 2018 refinery fire.

"Refinery workers and surrounding community residents are rightly concerned about the adequacy of the risk management for the use of hazardous chemicals like HF," the board said in that letter, which grew out of the CSB's probes of fires at refineries in Wisconsin, California, and Texas.

The United Steelworkers union (USW), whose members work at major refineries, launched a campaign in 2010 to end the oil industry's use of HF. In 2013, the USW found 26 million people in the United States were at risk of HF exposure from a refinery accident.

"We would like the industry to invest in finding intrinsically safer alternatives," said Michael Wright, the USW's director of health, safety, and environment.

The oil industry has rejected calls to convert HF alkylation units to sulfuric acid, which does not form a low-hanging cloud that can drift into neighbourhoods, saying the cost would be too high and alternatives not well developed.

HF has been used for about 70 years in refinery operations, according to Diana Cronan, spokeswoman for the trade group American Fuel and Petrochemical Manufacturers. About 2% of the HF used in the United States goes toward refining, she said.

Sulfuric acid reactors can be two to three times as large as HF, Cronan added, making them less attractive to manufacturers.

But HF is risky because it forms dense vapour clouds low to the ground that can easily move into the communities around refineries. Since it destroys nerve tissue, burns may be initially painless. It can also cause cardiac arrest in higher concentrations.

Most of the 27,000 residents of Superior, Wisconsin, were evacuated in 2018 due to the risk of a release of HF following an explosion at Husky Energy Inc's refinery, according to news reports at the time.

Husky has said it expects to resume partial operations at the site in late 2020.

A 2015 explosion at a Los Angeles-area refinery, then owned by Exxon Mobil Corp, raised the risk that a storage tank containing HF could have been ruptured, according to the CSB.

The USW campaign began following a 2009 explosion on an HF alkylation unit at the Citgo Petroleum Corp refinery in Corpus Christi, Texas, that the CSB found likely released up to 4,000 lbs (1,814 kg) of HF. Much more than that was contained by water spray cannons around the burning unit.

Before the Corpus Christi fire burned out, the water supply system was nearly exhausted and hoses bringing additional supplies ruptured but were quickly replaced or repaired, the CSB found.