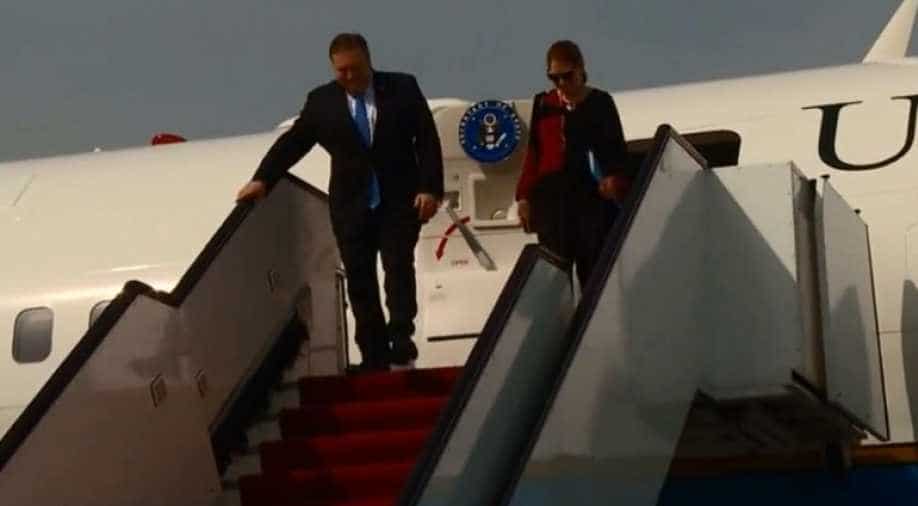 The top US diplomat's visit to the small, energy-rich Gulf state comes amid a more than 18-month-old dispute pitting Riyadh and its allies against Doha.

US Secretary of State Mike Pompeo arrived in Qatar on Sunday pushing for an end to a diplomatic rift between Washington's Gulf allies on the latest leg of his Middle East tour.

The top US diplomat's visit to the small, energy-rich Gulf state comes amid a more than 18-month-old dispute pitting Riyadh and its allies against Doha.

"It is time for old rivalries to end for the sake of the greater good of the region," Pompeo said on Thursday in Cairo, where he laid out the Middle East strategy of US President Donald Trump's administration.

The secretary of state travelled to Doha from Abu Dhabi, where he met with Crown Prince Mohammed bin Zayed on Saturday.

Pompeo is later expected to head to Riyadh, where all eyes will be on a possible meeting with Crown Prince Mohammed bin Salman.

The visit comes just three months after the murder of Saudi journalist Jamal Khashoggi in his country's Istanbul consulate.

Saudi Arabia, the UAE, Bahrain, and Egypt — all US allies — cut ties with Qatar in June 2017, accusing it of supporting terrorist groups and seeking closer ties to Saudi arch-rival Iran.

Qatar — also a US ally — denies the allegations and accuses the countries of seeking regime change.

Washington, which at first appeared to back the boycott, has so far been unsuccessful in trying to get the countries to set aside their differences in order to focus on Washington's regional priority — the fight against Iran.

Attempts at mediation have stalled, as highlighted by the recent resignation of US envoy Anthony Zinni — who quit because of an apparent "lack of will" on behalf of "regional leaders" for regional reconciliation.

For Washington, turning the page on the crisis is essential for the successful launch of the Strategic Alliance of the Middle East (MESA), which is a NATO-style security pact that includes Gulf countries as well as Egypt and Jordan.

"Today, we ask each of those countries to take the next step and help us solidify MESA," Pompeo said in Cairo.

But the task is not going to be easy.

"It is complicated to put together, make no mistake about it because we're talking about a complex agreement among a number of nations where we're asking for significant commitments from them," Pompeo told reporters in Abu Dhabi on Saturday.

"But I believe that there is a path forward where there's a set of common understandings."

The two are expected to hold a joint press conference on Sunday.

Qatar's relationship with Iran is complicated as it shares the world's largest natural gas field with Tehran.

Gas has been responsible for transforming Qatar into one of the richest countries in the world since it first began exporting liquefied natural gas little more than 20 years ago.

It has also agreed to increase gas production since the beginning of the crisis.

Washington's call for regional unity is clouded by its relations with Saudi Arabia since the murder of Khashoggi in early October.

During Pompeo's previous visit to Riyadh at the height of the Khashoggi affair, his broad smiles with the crown prince had outraged some Americans.

Trump has said he wants to preserve the alliance with the Saudi kingdom, although the US Senate has clearly blamed Prince Mohammed for the murder.

"We will continue to work to ensure that all those responsible for the murder of Jamal Khashoggi are accountable," Pompeo said Friday on the US channel Fox News.

He reaffirmed that US-Saudi relations remain "incredibly important to Americans".