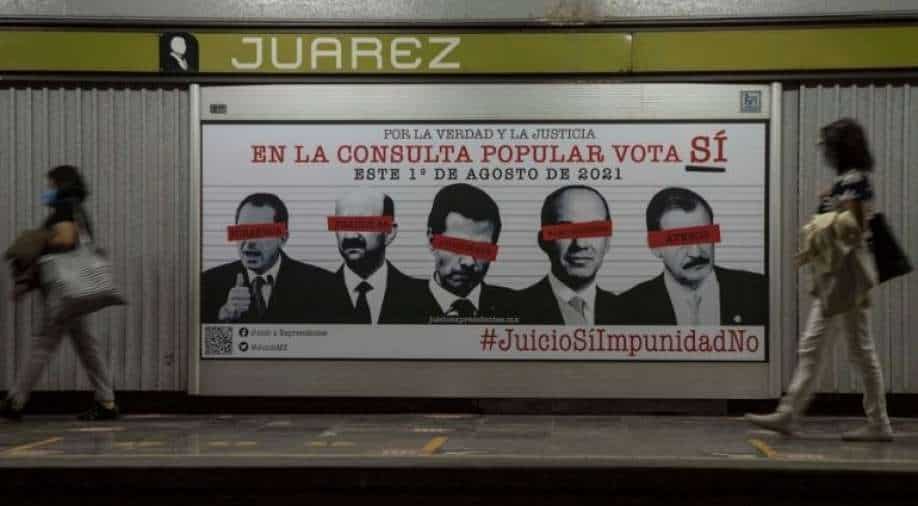 37.4 million voters or 40 per cent of the electoral roll must participate to ensure that the referendum is binding, but most voters are not enthusiastic

Mexicans began voting Sunday in a national referendum promoted by President Andres Manuel Lopez Obrador on whether to investigate and prosecute his predecessors for alleged corruption.

Lopez Obrador, a self-styled anti-graft crusader, says the public consultation will strengthen participatory democracy, but critics see it as little more than a political stunt.

To be binding, 37.4 million people -- 40 per cent of the electoral roll -- must participate, but many voters appear unenthusiastic.

While the "yes" vote could win up to 90 per cent, it will be difficult to achieve even 30 per cent turnout, said Roy Campos, director of the polling company Mitofsky.

Rosario Gomez is among those who plan to vote at one of 57,000 ballot boxes set up by the electoral institute, compared with more than 160,000 for June's legislative and local elections.

"It's about time these thieves pay!" the 52-year-old market vendor said.

Polls opened at 8 am (1300 GMT) and were due to close at 6 pm, with the result expected to be known within two or three days.

Mexico is ranked 124th out of 179 on Transparency International's world corruption perceptions index.

But former presidents can be tried like any other citizen and critics argue that the referendum is unnecessary.

Former National Electoral Institute president Luis Carlos Ugalde argued that if the prosecution has evidence against the ex-presidents, it's not necessary for "the people to tell you yes or no."

Although the vote was Lopez Obrador's brainchild, he has ruled out voting himself because he does not want "corrupt and hypocritical conservatism" to accuse him of vindictiveness.

Lopez Obrador has accused them of presiding over "excessive concentration of wealth, monumental losses to the treasury, privatization of public property, and widespread corruption," drawing angry denials.

In the end, the Supreme Court modified the referendum question for a more ambiguous alternative.

"It's not very sexy. Not even the lawyers understand it," analyst Paula Sofia Vazquez told AFP.

The question reads: "Do you agree or not that the pertinent actions be carried out, in accordance with the constitutional and legal framework, to undertake a process of clarification of the political decisions made in the past years by the political actors, aimed at guaranteeing justice and the rights of potential victims?"

Omar Garcia, a survivor of the disappearance and presumed murder of 43 students in 2014, allegedly at the hands of corrupt police and drug traffickers, said listening to the people was valid even if it was not binding.

"It does encourage an end to impunity," Garcia said.

But 59-year-old manager Monica Ortiz-Monasterio has no plan to vote and thinks it is "the final straw to ask if crimes are prosecuted or left unpunished."